Welcome to an archive of historic Dover articles 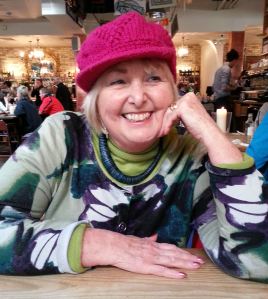 This website is about Dover, East Kent, England. The history of the town is lost in the mists of Time – suffice to say that a Bronze Age Boat was found while laying a major road through the town. The unique boat is now on show in the Museum.

A new story on Dover’s past is uploaded regularly and the site is proving popular not only in England but throughout the world!

To read the stories about the history of the town – which I once love but now sadly has been deliberately destroyed – just click on Topics/ Select category, on the right, or by typing in a specific topic in the Search box, also on the right.

As people are beginning to settle in to the quarantine restrictions due to Coronavirus, the hits to Doverhistorian.com are increasing with specific topics, such as locations, buildings and personalities at the top of the list. Also Swingate Part IIb is receiving particular positive feedback as this final part of the important role the area played during WWI, is being uploaded in virtual serial form.

This presentation came about because the story centres on the WWI airfield having come under American control yet remaining as part of the Fortress Dover defences towards the end of WWI. These defences included Dover town (which was in lock-down), the harbour and the Channel seas in relation to what was happening on the Western Front – where the Americans were being sent. Jointly, these have generated a considerable amount of inter-related information and collating this takes time.

Albeit, the unexpected result of uploading Swingate Part IIb in small parts is the creation of a serial that is being increasingly followed due to the Coronavirus! 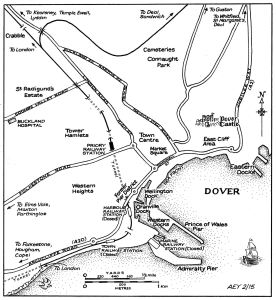 The once celebrated seaport town of Dover, England is situated in the south-eastern corner of the county of Kent and is of great antiquity. Indeed, archaeological discoveries go back to the Stone Age and the famous Bronze Age boat – the world’s oldest sea-going boat – is housed in the town’s museum.

Named Dubris by the Romans this later evolved into Dover and the Dour for the river that runs through the town. During the Saxon period Dover became a fishing port and Edward the Confessor, (1042-1066) recognising this expertise, which included ships that were strong enough to withstand the conditions in the Channel and the North Sea, proclaimed, in 1050, that the towns folk would provide ‘ship service.’ Along with Hastings, Romney, Hythe and Sandwich, Rye and Winchelsea, the town was one of the Cinque Ports that provided England’s first long serving Royal navy. 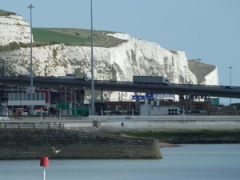 The famous white cliffs that were the symbol of home to the Englishman abroad overlook the town. The Strait of Dover is the shortest distance between England and mainland Europe and this has, historically and strategically, been of significant importance to Britain up to the end of the end of World War II (1939-1945). Since then, for the same reason, Dover’s port became one of the busiest passenger ports in the world. Now it is heavily clogged with polluting lorries.

Dover was heavily bombarded during World War II but did retain many significant historical buildings, ancient archaeological remains and areas of outstanding natural beauty. These however have either been destroyed and are under threat carried out in an Orwellian interpretation of progress. Luckily, there are depositories of historic documentation from the propitious days gone by and from which the stories, published on this website, come from. Please browse the index of Topics on the right for a wide variety of articles from the rich tapestry of Dover’s past.

Click on Topics/ Select category, on the right, or by typing in a specific topic in the Search box, also on the right.

Schematic map of East Kent showing road and rail links to the town and port of Dover. Courtesy of A Friend

98 Responses to Welcome to an archive of historic Dover articles

This site uses Akismet to reduce spam. Learn how your comment data is processed.