Hay Winthrop and the Ship Condor 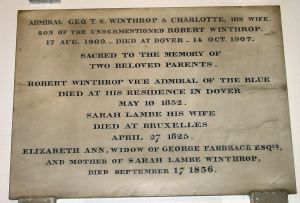 In St Mary’s Church, Dover, there are memorials dedicated to members of the Winthrop family and it would appear from these that the sea was an important part of their lives. Indeed, Robert Winthrop, Vice Admiral of the Blue, died at his residence in Dover on 10 May 1832. His son, George, who died on 14 October 1907 in Dover, was a full Admiral. George’s wife, Charlotte, was the daughter of General Sir William Wood. Another son of Vice Admiral Robert was Hay Erskin Winthrop, born in December 1815 in Dover and he too enjoyed a naval career.

Whether Admiral George Winthrop was particularly close to his brother Hay is not clear, but he called one of his sons by that name. Hay was born in 1876 and when he grew up joined the Royal Navy too. As a lieutenant, Hay was assigned to the Condor a sail/single screw steel 980-ton sloop, built at Sheerness and launched 17 December 1898. One can guess that Hay was please when he joined the Condor on her first commission. 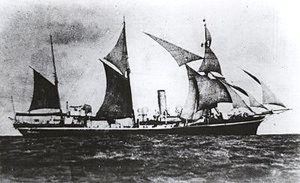 Under the command of Captain Clifton Scalter, the Condor had left England bound for duties in the Pacific arriving at Esquimalt, Victoria, British Columbia in November 1901. She left there for Honolulu on 2 December 1901 where she was due to arrive on 3 January 1902. The day after they left a fierce storm blew up, but as the Condor was new, this was not expected to be a problem. Days passed but the ship did not arrive in Hawaii.

On the 23 January, the Phaeton was assigned to search for her and a few days later the Egeria took part in the search. In early February, the Phaeton reported that nothing had been found but the Egeria had not reported in. Due to recurrent storms, fears were expressed about her fate too.

However, in early March the Egeria returned to port bringing artefacts from the Condor. There was also the report from the master of a local steamer that a boom had been found near Uclulet on the west coast of Vancouver. This was marked Condor and in the same area a ‘few cases of salmon, no marks.’

On 24 March the Admiralty assumed that the Condor was lost and issued a statement telling, ‘widows, orphans and dependent relatives … to apply to the Greenwich Hospital Department … in order that their claim for assistance from the funds…’ That same day a Miss Agnes Weston made a public appeal for funds to help dependent relatives ‘to live until Government pensions and other help is available.’

In the meantime, Sir Charles Cameron, who was the father-in-law of Commander Scalter, undertook the local investigation into the Condor’s loss. At the subsequent Inquiry, he reported that a boat from the Condor had been found at the beginning of January on a beach on the south-west coast of Vancouver Island. This was near the wreckage that the Egeria found. The wreckage included a deck grating, a spare boom, and a couple of boxes. Except for the boom, these, said Sir Charles, would have been kept on deck or in the chart-room. The boom along with the boat found on the beach, which would have been on the forecastle with the boom lashed to the deck, so could have been washed overboard.

Captain Simpson, whose speciality was surveying and hydrography, reported that the articles found must have come adrift near the coast, for at sea the currents would have carried them in a contrary direction. He went on to say that, if engine or machinery had been the problem the Condor would have returned to Esquimalt for repairs. As she had not done so, in his opinion she had foundered during the storm of 3 December.

“In a Man of War”, he continued, “to give shelter in fighting, the bulwarks are breast high and very strong, and if a vessel of the Condor’s build shipped a heavy sea a huge weight of water would have landed in the well without any means of escape, and the swish of this might aggravate a roll to such an extent as to upset her altogether.”

Further evidence showed that Commander Scalter and the captains of the Condor’s sister vessels, the Rosario, Mutine, Rinaldo, Shearwater and Vestal, had all expressed concern over this. 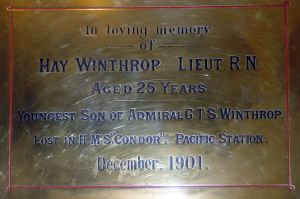 Sir Charles Cameron also pointed out that due to the general scarcity of sailors the Condor, was 30 less than her full compliment of crew. “Besides the captain, there should have been four lieutenants, in fact there were only three on active duty … On their way to Vancouver, the ship had put into Columbia where yellow fever was rife … A number of crew contracted the disease including the navigating lieutenant.”

Written evidence was read out from Robert Marshall, a boat-puller off the sealing schooner Mary Taylor. Marshall stated that the Condor “foundered during that awful night of December 3 … near Cape Fattery … one of the schooners (had) seen her in distress … she was firing off guns and skyrockets and afterwards she went down. It was too rough to get near her.”

The Admiralty considered this and all the other evidence and their verdict attached no personal blame to Commander Scalter over the loss of the Condor. Further, they recommended that the Royal Navy should entirely abandon the use of sail/steam ships – which they did.

I am a local historian, whose love of Dover has lead to decades of research into some of the lesser known tales that this famous and beautiful town has to tell.
View all posts by Lorraine →
This entry was posted in Armed Services, People, Winthrop Hay and the Ship Condor, Winthrop Hay and the Ship Condor. Bookmark the permalink.
Loading Comments...
%d bloggers like this: