It was 1995, and although registered deaf I was one of two witnesses to an offence. I actually saw what had happened as did the other key witness, whom I neither knew nor was I aware that he had seen what I had seen. The investigating officers could not believe their luck, as both of us had reported the incident within minutes of it happening.

Reporting what I saw and what had been said, (I had ‘heard’ by a combination of lip reading and hearing) I was later told that the other witness, a hearer, had reported more or less the same as I had. The prosecuting officer felt, however, that even though the case rested on what had been seen, as I was deaf and wore a hearing aid – including at the time the offence was committed, I should have it confirmed that I had understood what was going on.

A letter was written to my ENT consultant for the said testimonial, though I had not seen a consultant for some twenty years. As a patient with a chronic disability one only saw consultants when things were going wrong. I did know the registrars though as I had been attending ENT clinics since I was about three years old. By this time I was in my late forties.

My deafness had come about due to a proneness to mastoids – briefly, inflammation of the mastoid bone behind the ear – and having undergone a radical mastoidectomy in 1972, I was completely deaf in one ear. The other ear, also subjected to a mastoidectomy, still offered me some residual hearing, at that time, which was augmented by a hearing aid. The hearing aid, however, gave rise to almost continual ear infections, which can precipitate mastoiditis and also cause wear and tear that meant there was a good chance I would lose hearing in that ear too – which I subsequently did.

Typical of my sort of deafness, my speech tended to be rapid, very nasally and loud when I was not consciously controlling it (i.e. anxious etc.). Otherwise, I spoke too quietly and without much intonation. I enjoyed music that had a strong beat that I could feel through my feet, but anything complex was lost on me. When I was a teenager I managed to get a front row ticket for a Pink Floyd concert and fell asleep as I could not understand the complexity of sounds!

Television required too much concentration so I only watched programs that really interested me. Even then, after about forty minutes my concentration would go and I either fell asleep or went off to do something else. My husband had rigged up the sound to go through our stereo loudspeakers that did help, as did the loop system in conjunction with my hearing aid, but I preferred to read. 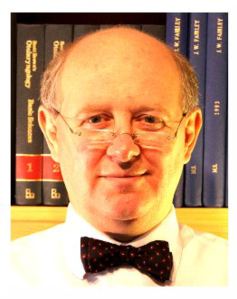 The Ear Nose and Throat (ENT) consultant at William Harvey Hospital, Ashford, Kent, Mr James Fairley, asked to see me before he would write the letter for the court. He examined my ears, nose and throat and I had hearing tests. At then end, he said that he would write a letter of confirmation and he also asked if I would like to be a guinea-pig for a new hearing appliance, the Bone Anchored Hearing Aid or BAHA. I promptly said NO! In 1967 I had an operation which had improved my hearing a little but in 1972 things went horribly wrong and I ended up having the radical mastoidectomy mentioned above and lost three teeth.

Undeterred, Mr Fairley gave me copies of all the bumf appertaining to the BAHA and an appointment was made for me to see the Audiologist, Andrew Bean. I went home and discussed what happened with my husband, Alan, and he suggested that I should at least go and see Mr Bean before I made up my mind.

Schematic drawing of how the BAHA bone conduction implant works

About a week before the case came to court I saw Andrew. I was still cynical and only half heatedly went along with the tests he wanted to perform. One of these tests was to grip a BAHA between my teeth and report what I heard. I was sitting in one of the consulting rooms with my back to the door that led onto the corridor. Yes I could ‘hear’ what Andrew was saying – I was facing him and could lip read him augmented with my bit of residual hearing. There was no extraneous noise so I correctly reiterated what Andrew was saying but was not impressed.

Then someone came into the room and asked Andrew if he would go and check something. Andrew apologised and left leaving the BAHA between my teeth and the door open. I was about to take the machine out of my mouth when I noticed that I could hear the people in the corridor. Not the usual muffled noise that told me that they were there but words and clearly!

I took the BAHA from between my teeth and sounds became a muffled cacophony that I was used to. I put the BAHA back and the sounds became louder but, and this was the main thing, clearer. After a few seconds concentration I managed to hone in on the nearest conversation and could follow what was being said – and I deliberately had my back to them!

Andrew came back and closed the door and I promptly opened it again! Checked what I could hear with the BAHA between my teeth and what I could hear without it. The difference was unbelievable. Andrew looked at me as if I was crazy, but soon softened when I told him what had happened and that I … agreed to go ahead with the operation!

The court case came and I gave my evidence. I was cross-examined – ever so politely and left the stand feeling mildly satisfied that I had done my bit for British justice. I did not hear the summing up by either the defence or the judge. I am glad I did not for when I read what the judge had to say I was horrified.

In essence, I was deaf and therefore I was not a reliable witness even though the case rested on what had been seen! This just left the word of the other witness against the perpetrator. The other witness had used the expression ‘I believe’ on the stand, and this, the judge felt, could mean that the witness was not sure of his facts. Needless to say the perpetrator was found not guilty.

Shortly after I had the first of the then two-stage operation, the second part was some four months later. Then came the day of reckoning. As I was one of the first ones to have a BAHA fitted in my area, there were a number of people in the consulting room at Buckland Hospital, Dover, besides Mr Fairley, Andrew and Alan. Mr Fairly put the BAHA in, having adjusted it to the level he thought would be correct for me and switched on. I could clearly hear one of the nurses saying to another ‘Do you think it will work? To which I replied ‘YES! Tears were in both the nurses’ eyes. I could hear clearly for the first time in my life.

We left the consulting room, both Alan and I almost euphoric and went straight into a world that I had never experienced before – it was raucous! I commented to Alan ‘My goodness what a loud world you live in!’ He hugged me and he too had tears in his eyes – and he still recalls the event!

The noise of traffic, as we left the hospital, was far too much for me, so the BAHA was switched off. When we reached home I switched it on again. Alan had put Mozart’s Piano Concerto Number 21 on the CD player. It was the first time I had heard anything so beautiful. I switched off the BAHA, yes I could hear the noise but it was nothing like the music I heard with the BAHA switched on. We have a close friend, who is a professional pianist, and now includes that piece of music in her repertoire calling it ‘Lorraine’s theme’. 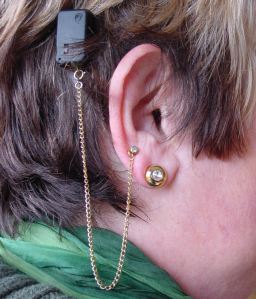 Lorraine’s BAHA, the chain ensures that if the BAHA is knocked off it is lost

It took about six months to get use to the BAHA, but that it made a considerable difference to my life. First, I can now speak properly (although it did take a couple of years of hard work to achieve the clarity I now have). I used that skill to raise deaf awareness throughout the county until I was ill with cancer in 2002. I enjoy a wide range of music although I still find Pink Floyd and symphonic pieces beyond my ken. Nonetheless, I can now watch television programs without falling asleep but still need subtitles to augment what I can hear.

So, even though my day in court did not produce the result that had been hoped for, it did enable me to hear! Did the perpetrator commit the same offence again and was he caught? To be honest I do not know, but I am sure that as fate played a large part in restoring my ‘hearing‘ through the BAHA, fate will also see that justice was done.

Footnote by Mr James W Fairley, Consultant ENT Surgeon:
I remember Lorraine’s story well. We now know that BAHA implants reliably achieve excellent hearing improvement. We fitted the first BAHA (Bone Anchored Hearing Aid) in Kent at the William Harvey Hospital, Ashford in 1995. Lorraine was one of the earlier patients in our district, but not the first to undergo this life-transforming treatment. The technology is based on Swedish Professor Branemark’s invention titanium dental implants. The first prototype BAHA was implanted in Goteborg, Sweden in 1977. By 2013, over 100,000 patients worldwide have received BAHA implants. Some NHS commisioning groups (including Kent) have classifed BAHA as a Low Priority Procedure, and there have always been funding restrictions. Despite the restrictions, we have helped over 150 Kent patients to hear again using BAHA implants. Further information on BAHA at http://entkent.com/baha.php

I am a local historian, whose love of Dover has lead to decades of research into some of the lesser known tales that this famous and beautiful town has to tell.
View all posts by Lorraine →
This entry was posted in BAHA - A Personal Story, Hospitals and Health. Bookmark the permalink.
Loading Comments...
%d bloggers like this: