Early in 2013 we visited the National Memorial Arboretum, Alrewas, Staffordshire, where there is plaque to a dear friend, John Petch. Access to the site, for those who travel by bus is poor except for Sundays. As it was a week day by the time we finally arrived a sit down and cup of tea was the first priority.

In the corner of the cafeteria was a 10-foot tall, finely carved wooden policeman, complete with helmet. I immediately recognised the statue as the one I had last seen, some years ago, at Bramshill Police Training College. Dovorian, Police Sergeant Bob Forsyth had carved it for the centenary of Kent County (Police) Constabulary in 1957. Examination of one of the attached plaques confirmed this. Apparently, the carving was presented to Bramshill Police Staff Training College in 1958 and is on loan to the Arboretum where Her Majesty’s Chief Inspector of Constabulary, Sir David J O’Dowd on 26 September 2001, unveiled it.

Bob was born on Tyneside and a keen sportsman, particularly rowing, he eventually joined the police. Of his children one – Alan – was in the same class at the Dover Boys Grammar School as my husband, also called Alan. There is Jean, his daughter, eldest son is Robert and Jim, the youngest, who was a fire-fighter in Dover. In his spare time, Bob developed his interest on woodcarving, working from his studio, at his home in Lower Road, River. Self-taught, he became one of the most commended word-carvers in the country and he also passed on his skills by teaching adult education classes up until he died on 29 April 1989. 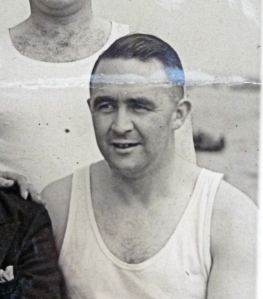 Showing a remarkable artistic talent from an early age, Bob was only 11-years old a pen and ink drawing of his was given highly commended. However, it was not until World War II that he turned to carving. With a group of fellow servicemen he was in a pub when someone produced a small carved figure by an African artist, saying that ‘None of our chaps could do anything like that.’ Bob bet £2 that he could and produced his first wood carving this is of ‘Flying Officer Kite,’ using wood from the end of a beechen air-raid bunk – he won his bet!

He then went on to carve many pieces that are now highly acclaimed, perhaps the best known, at the local level is the life size carving of St Richard of Chichester that stands in the Stonehall, Maison Dieu. That statue was carved from elm tree trunk, which came from  Waldershare Park in 1955 and was listed in the Dover District Council Art Audit in 1992.

In 1959 Bob carved a plaque of Sir Winston Churchill, the then Lord Warden, for Colonel Cecil Lines. Six years later, in October 1965,  Colonel Lines, councillor for Denton and Wootton, presented it to Dover Rural Council and, until their demise in 1974, gave it pride of place.

Bob Forsyth – Pieta for the Church of Our Lady of Dover, Buckland Estate 1961 – thanks to Jim Forsyth

However, it is in the church of Our Lady of Dover, Buckland Estate where one can see the magnificent Pieta, carved by Bob, which depicts Christ lifted from the cross by Mary Magdalene, with Mary mother of Jesus and Joseph of Arimathea in attendance. This was created at the behest of Peter Mee, who in 1974, became the first Town Mayor of Dover (after the 1972 Local Government Act).

The figures are life size and the cross is over 15-feet high. It was in 1961 that Bob created this work of art using the engineering shop at the former Buckland Paper Mill, Crabble Hill. At the time, Bob said that when he was working on the face of Jesus, he could not get it right. In the end he went home feeling disgusted with himself. He returned to his makeshift studio the following morning with the intention of trying to rectify the carving but when he looked at the face – it was perfect, but not as he left it! 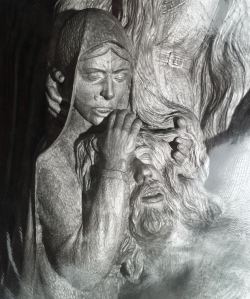 In January 1994, Dover Harbour Board announced that the former White Cliffs Hotel, on Dover’s seafront, was being refurbished. In April that year, it re-opened as the Churchill Hotel with the Lord Lieutenant of Kent, Robin Leigh Pemberton marking the occasion by unveiling a cold-cast bronze plaque of Sir Winston Churchill.

Jim Forsyth had made this, and it had been turned and cast by Barry Sheppard, of Rawlson Ltd, Holmestone Road, from the woodcarving made by his father, Bob, in 1958 and had been presented to Dover Rural Council. Of note, Barry was also in the same class at the Dover Boys’ Grammar School as Jim’s brother, Alan.

In 2005, the Churchill Hotel became part of the Best Western Marketing Consortium. A couple of years later I was asked to give a talk at that venue, in which I planned to refer to the sculpture but it was missing! I enquired several times as to what had happened to it but was repeatedly told that the sculpture had gone for cleaning. Then on 28 January 2010, the Consortium announced that the hotel had ceased trading. By that time, I had brought Mike Krayenbrick of Dover Harbour Board into the search for the missing sculpture, along with Dover’s two local papers, Dover Mercury and Dover Express, but we all drew a blank.

Bob Forsyth – One of his smaller carvings – thanks to Jim Forsyth

Besides carving the majestic pieces, Bob created numerous smaller pieces such as heraldic beasts,  unicorns and owls as well religious pieces. During the Great Storm of 1987, Barry Sheppard lost his Japanese Pagoda tree and when he cut across the wood he was astounded by the different colours. He told Bob and he carved an owl for Barry out of it. Bob also carved for the Dover Probus Club the Chairman’s badge of office. This has Dover Castle on the front and a humorous verse on the reverse. It is worn with a ribbon at the monthly luncheons.

I am a local historian, whose love of Dover has lead to decades of research into some of the lesser known tales that this famous and beautiful town has to tell.
View all posts by Lorraine →
This entry was posted in Forsyth Bob - Wood Carver Extraordinary, Forsyth Bob - Wood Carver Extraordinary, People, Religion & Churches. Bookmark the permalink.
Loading Comments...
%d bloggers like this: