Former Burlington House from Fishmonger’s Lane, Centurion House on right both earmarked for demolition as part of the St James Area

As part of the latest St James Area Development proposal Centurion House, on the corner of Bench Street and Fishmongers Lane, has been demolished. Ironically, the building it replaced was the centre of a major legal battle that divided the town and centred on a craftsman bootmaker called Fred Greenstreet.

Fred Greenstreet’s great-grandfather, John, was born in 1786 Kingston, near Canterbury and apparently served his apprenticeship in that city. At that time only those who had the Freeman of Dover status could set up a business in the town and this could only gained by birth, marriage, apprenticeship, purchase, redemption – making a gift to the town or by decree. In 1827, John Greenstreet paid £30 to purchase his Freedom and set up his business as a bootmaker in Snargate Street.

John’s shop at 133 Snargate Street, was possibly where Sharpe and Enright are today. At that time, Snargate Street was in the heart of the heavily populated commercial and maritime Pier District of the town. Later, John moved the business to number 54, further west and on the opposite side of Snargate Street. The value of the new location was that it backed onto Commercial Quay where the shop was listed as number 4. 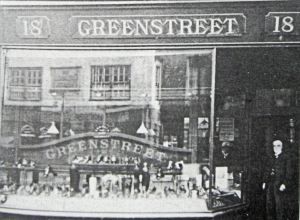 Bootmaker John Greenstreet at the doorway of his shop,18 Bench Street. Thanks to Joe Harman

John James, his son, was born in 1821 and claimed his freedom by apprenticeship to his father in 1848. He too had a son called John, who was Fred’s father. John junior was born in 1848 and claimed his freedom by birth in 1877. In 1899, John junior married Kate Baker and bought 87 High Street and forge, Charlton for £720. His solicitor was Arthur Harby of Stillwell and Harby, 4 St James Street and he wrote to congratulate John on his marriage. That same year, the Greenstreet firm moved to 18 Bench Street.

Fred (Frederick William) was christened in St Mary’s Church on 29 October 1905 and attended Dover Boys’ Grammar School from 1915 to 1922 – at the time this was on Frith Road. On 15 March 1930 John, died and from his obituary, it would seem that for a while his two brothers were also involved in the family firm.

In 1934, Fred married Mary (Mollie) Prescott and they had two children, John born in 1936 and Rosemary in 1944. A keen sportsman Fred belonged to the Dover Cricket Club at the same time as Dover’s international cricketer Eddie Crush (1917-2007) was starting out on his career. In May 1939, they were both mentioned in Times when Dover College beat the Dover Cricket team! Fred was l-b-w by P J Pearce for 31 and Bloy bowled out Eddie for 22. 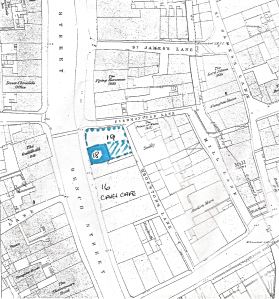 By the outbreak of World War II (1939-1945) the firm had purchased the land behind the shop that had belonged to 19 Bench Street and extended to Thornton Lane. This they turned into a garden for the children while underneath the cellar was enlarged used as a workshop. The council designated the workshop as an air-raid shelter for 60 people for the duration of the War. During that time much of Dover was devastated including Caves Café, next-door-but-one to the Greenstreet premises.

In 1959, a Walmer builder bought the derelict Café, number 16 Bench Street with the intention of rebuilding it as a shop with a flat above . Nothing happened and the site was eventually sold to Bernard Sunley Investment Trust of London. In November 1965, they launched a £500,000 redevelopment scheme for the east side of Bench Street and King Street, which included Fred Greenstreet’s shop.

The plan was to build a three-storey block of shops in Bench Street and a mirror image block in King Street, all of which would be fronted by a paved pedestrian forecourt. Although Fred’s shop and others were thriving, part of the area was a bombsite and those that buildings that remained standing, like Caves Café, were derelict. The town council therefore gave the plan their full support.

Fred Greenstreet at work. Thanks to Joe Harman

This resulted in a protracted feud between Fred and the council,  in which Fred based his argument on his rights as a Freeman by birth. Dating from Saxon times the original Freemen of Dover earned their living from the sea. Over time they amalgamated with their counterparts in Sandwich, Hythe, Romney and Hastings to form the Confederation of the Cinque Ports. This was formalised in a succession of charters that gave an increasing number of rights to Dover Freemen, throughout the Norman and Medieval periods, making them very powerful. The situation began to alter from 1835 when national changes in legislation reduced the special rights of Freemen.

As Fred’s great-grandfather, John had purchased his Freedom in 1823, the rights descended through the male lineage that, Fred argued, gave him right to trade and for the Mayor to ensure that he could. When, in April 1970, Dover Borough Council gave planning consent for Mr Greenstreet’s shop to be compulsorily purchased and demolished Fred wrote to the then Mayor, Alderman William Muge reminding him of this right. He wrote, ‘You are not only the town’s first citizen, but also a trustee of the rights and privileges of hereditary and honorary freemen of the borough. It is therefore your duty, and the duty of the council, to honour your trusteeship by safeguarding the rights of Freemen, against any person or persons who may wish to endanger our rights to trade in this Borough.’

The council offered £12,500 for the shop but Fred declined, saying that it would cost him £30,000 to move. Adding that the council were assisting the developer to get rid of the Greenstreet business for peanuts in order for the developer to, ‘make a handsome profit.’ The council retaliated by claiming, wrongly, that the garden behind the shop belonged to them and so reduced the offered of compensation to less than the market value of the Greenstreet site.

Bernard Sunley Investment Trust sold their holdings in the area to Commercial and General Investment who planned to build the largest supermarket in Dover with offices above. This, it was envisaged would cover the same King Street/Bench Street site as the earlier plan. The council was unanimous in serving Fred with a purchase order for his property in order to allow the development to go ahead and ‘bring new life’ to that part of town.

Fred, by this time, was living in Shepherdswell but was resolved that he was not going to close his shop. The result was a two-day Public Inquiry held in May 1971, under the Department of Environment Inspector, Peter Baines. Barrister Christopher Cochrane represented Fred.

At the Inquiry, Bernard Gould, for the developers, said that they had offered Fred £22,500 for the shop but this had been declined. Fred, he told the Inspector, had said that it was not enough as he wanted more money so that he could retire and set his son up in a business of his own. Malcom Barrett, for the council and looking at the bigger picture, stated that there was a demand in Dover was for large multiple shops, not for small shops. Adding that there was also a demand for offices, as they would provide jobs.

Some 30 witnesses appeared on Fred’s behalf, including Mary Dixon, who later, with her husband, successfully took on the council in the Cowper Road gate affair and they also had the façade of the Museum listed. John Mannering of the corn milling family gave supporting evidence along with shoe shop owner, Gerald Walter and John Clithero, general secretary of the New Dover Group (now Dover Society).

However, the Environment Secretary, Peter Walker (1932–2010), took the side of the council and the developers and confirmed the compulsory purchase order. However, he went on to say that as to the validity of the legal arguments, he was leaving these to the legal advisers at the Department of Environment. They confirmed the validity and Fred’s only option was to take the matter to the High Court, which he did.

Again, the Establishment was against Fred but, by this time, he did have most of the town supporting him. Fred also managed to get one over the council! With their usual vindictiveness, the council were set to make life for Fred as uncomfortable as possible (see Transparency). At the time he was a chorister at St Mary’s Church and would leave his car in Stembrook carpark when attending.

In 1972, the council put a parking ticket machine in the carpark  and charged 50pence a day to park. It was Sunday, so Fred did not buy a parking ticket, was subsequently hauled in front of the local magistrates and fined £2. Fred successfully appealed to Canterbury Crown Court, pointing out that the council had not applied for permission to erect the parking machine! His conviction quashed and the council were ordered to pay Fred £24 costs!

The Local Government Act (1972) that came into force on 1 April 1974 created Dover District Council (DDC) and the development project was, by this time being locally handled by Worsfold’s estate agents in Market Square. The speculators were Centros Properties Ltd in association with Sun Alliance and London Insurance Group. DDC gave approval for the development as had been envisaged in May 1973. However, as part of the agreement Fred Greenstreet’s business was to be incorporated – Fred had won!

Until his new shop was ready, Fred moved to 9 Victoria Crescent, opposite the Royal Victoria Hospital. Not long after he was commissioned to make a pair of riding boots for Princess Ann. 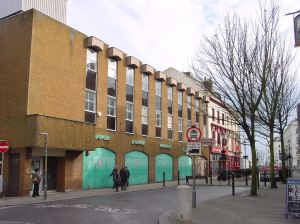 Centurion House Dover Indoor Market Bench Street boarded up as it was for years. AS

Centurion House, as it was named, was designed by Bovingdon Fowler, McBride of Harrow, built by R.J. Barwick, and opened in 1976. It was estimated to have cost £800,000. The ground floor was to be leased to Marples furnishing company and the first floor was to be used for storage. Marples never moved in and neither did Fred – the promise was rescinded! The ground floor briefly became an indoor market and upstairs, offices for the Inland Revenue.

Following a reorganisation, the tax office moved out but for years, the ground floor remained empty. In 2012 it was refurbished and briefly became a youth centre. However, in spring 2015 the building was demolished to make way for another development said to ‘bring new life’ to that part of town!

With the 1972, Local Government Act the existing rights of Dover’s Freemen ceased to exist. Fred stayed at Victoria Crescent until he finally retired in 1988. His wife Mollie died in 1989 and Fred died in October 1992.

The excellent mock-up of Fred’s shop, machines and artefact shown in this article can be seen at Dover Transport Museum, Willingdon Road, Whitfield.