High up on a wall near the corner of Stembrook and Castle Street, is a Dover Society plaque dedicated to Dover artist William Burgess (1805-1861). Not to be confused with William Burges, (1827–1881), one of the architects of the former Town Hall refurbishment’s and extensions, this William is, arguably, Dover’s greatest painter.

William was born in Canterbury about 1805. From an early age, he was encouraged by his uncle to draw. The uncle was in the coach building business in Orange Street, in that city and he wanted to utilise his nephew’s prodigious talent to help his business. After serving an apprenticeship with his uncle, William, accompanied by his close friend, fellow artist, Thomas Sydney Cooper, set off to travel around Europe.

To fund their tour they planned to sell their work but were not very successful William returned to England. Sydney Cooper, as he is better known, remained and eventually became a famous artist. As for William, he settled in Dover in 1828 and married Harriet, a young lady from Deal. They settled first in a tiny cottage in Woolcomber Street before eventually moving to 14 Stembrook with a door for customers at 69 Castle Street.

Hoping for commissions in drawing and painting picturesque landscapes of Dover, William eked out a living giving art lessons. Some of his work was exhibited at the Royal Academy and by the Royal Society of British Artists. One of his earliest pieces is held by Dover Museum and is pencil sketch of St Martin-le-Grand dated 1829. 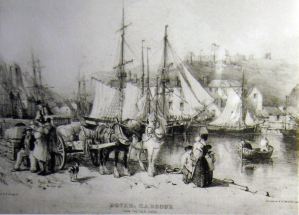 In 1844, William opened the then state-of-the-arts Cosmorama, using 14 Stembrook as the entrance. He placed his sketches and paintings of Dover in black frames behind large convex lenses. The frames were specially constructed to prevent light, other than that which was illuminating the picture, to enter. The illuminating lamp was placed on the top of the frame so the onlooker would see the picture as if being viewed through a window. 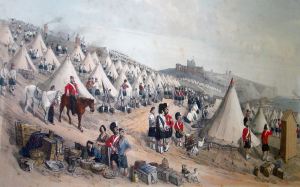 The attraction proved very popular, particularly to the town’s wealthy visitors, who also bought William’s paintings and lithograph prints. The prints of his paintings of Shakespeare Cliff in the Cosmorama were particularly popular such that it is the alley next to his house was renamed Shakespeare Place!

As time passed the demand for William’s services as teacher increased along with the number of commissions for his work. He also developed his Cosmorama shows into stories, such as the Seige of Dover Castle by Richard Dawkes. Possibly, to accommodate the expansion of his business, he and Harriet moved to 26 High Street in what was then the village of Charlton.

On 9 August 1860, Lieutenant George Thompson and Sergeant John Monger were killed in a shooting accident at Archcliffe Fort.  In his painting, William graphically captured the military cortege of Sergeant Monger from South Front Military Hospital, Western Heights. The lithograph print was his best seller and as it was dedicated to the officers and men of the Cinque Ports and other Volunteer Corps along with the Royal Artillery, the Royal Engineers, the 60th Rifles, and the 87th Regiment, all of whom assisted at the procession. This is now in the possession of Dover Museum. 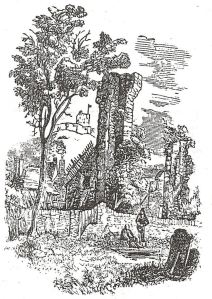 William died at the early age of 55 on 30 July 1861. His widow, Harriet, remarried Parker Ayres, a builder. Ayres laid out Norman and Saxon Streets in 1846, on land then called Priory Meadows that had once been part of the Dover Priory estate. Harriet died on 7 August 1884 and was interred in St Peter and Paul Churchyard, Charlton.

In 2012 Dover Museum acquired an historic collection of artworks, engravings, lithographs, photo’s prints, watercolours and sketches depicting Dover from the early 1720s to 1904. The money came from the Victoria and Albert purchase grant fund plus a donation from a local benefactor. The collection included three watercolours and two pencil sketches by the town’s most important artist – William Burgess.

I am a local historian, whose love of Dover has lead to decades of research into some of the lesser known tales that this famous and beautiful town has to tell.
View all posts by Lorraine →
This entry was posted in Burgess William - Artist, People, William Burgess - Artist. Bookmark the permalink.
Loading Comments...
%d bloggers like this: