For over a thousand years Dover does not have a gaol, jail or prison. The spellings gaol and jail are both in general use, but gaol has historically been in England while jail is used in the USA. The word prison is generic.

Prior to 1746, Dover had a number of gaols, mainly housed in the ancient town wall gate-towers. However, the preferred punishment was the medieval forms as locals enjoyed them. These were held in the Market Square and included the cage, stocks, pillory and whipping post. Agnes Jaoman was punished for roasting mutton on a fast day in the latter days of Mary I (1553-1558) reign. She was condemned to sit in the open market with her feet in the stocks and the shoulder of mutton before her and ‘afterwards to be commytted to prison there to remain until the ordenory taike further order therein.’ Agnes’s full story is told in the book: Haunted Dover.

The ducking stool over the River Dour, which was deeper in those days, was a favourite for punishing women. It was also used to punish adulterers while drunkards would be tied to a whipping post. Later the favourite punishment for women, when the town raised enough money to buy one, was the morter. This was a wooden yoke to which her outstretched arms were tied, she would then have to wear it for up to several days at a time without being freed to sleep, eat or go to the lavatory.

For men it was the pillory. One record tells us of Richard Shoveler who was convicted of being a common cutpurse and ordered to be put in the pillory with one of his ears nailed to the woodwork. The Bailiff or his deputy was to give a ‘knyffe in his hand and he leafe to cut off or els stande style there – this done to be done in the open plaice of market with a paper one his head.’ There is a Dover Society plaque nearby where these punishments took place.

Such punishments along with the local civic and judiciary systems as well as local laws were detailed in the 1356 Dover Customal. This had been drawn up under the guidance of the then Lord Warden (1355-1359), Roger Mortimer – the Earl of March. However, he was given the sack following the Barons of the Cinque Ports complaining to Edward III (1327-1377) that Mortimer had encroached upon their Chartered Rights.

In towns like Dover, the prison system that developed was structured on the amount the inmates could afford to pay for their keep. Gaolers usually tendered for the posts and earned their living as intermediaries between the prisoners and local traders. Inmates paid for food, heating, lighting, bedding etc. It was this that gave rise to the number of different types of prisons and the preference to the medieval form of punishment for those who could not afford their upkeep.

The prison for Freemen was in the Butchery Gate, facing the seafront, while in May 1613, moves were made to turn part of Biggin Gate into a prison for ‘better sort of fforeyners’ (None Dovorians) but this came to nothing. In 1702, the Queen Anne Charter, in Maison Dieu House, gave the appointment of the Keeper of the Prison to Dover’s Water Bailiff. This made incarceration of wrongdoers a lucrative source of revenue to the council and prison sentences became the preferred punishment. By 1722, the need for a large prison became imperative.

It was decided to convert the comfortable Freeman’s Prison, in Butchery Gate by this time on Townwall Street, into an austere town gaol and house more prisoners. However, the skilled carpenters and bricklayers who were paid 2s 6d (12½p) a day to do the job, complained that labourers received only a shilling (5p) less than they did and demanded a greater difference. The Corporation refused to either cut the labourers’ wages or increase the skilled artisans, the result was shoddy workmanship.

Within 14 years, the need for a purpose built prison became imperative but instead, in 1746, the Corporation bought a house in Queen Street paying £26 that was to be adapted. The main entrance was on what became known as Gaol Lane but it gave rise to another  industrial dispute. This time over a four tier pay structure that had been implemented whereby artisans received more than labourers and Freemen in both categories received proportionately more than their fellows. Again, the council chose to ignore the discontent and again the result was poor workmanship!

The gaol had to be partially re-built in 1795, when the front entrance was moved to Market Square and the facade had courses of strong masonry, upholding a strong semi-circular arch that actually supported nothing. On either side were shackles as a warning to evildoers and possibly poor workmanship!

Design for the new prison on Gaol Lane 1818 . Dover Library

However, on 26 May 1820, the smuggling galley Lively, was seized and the crew of eleven men confined to the prison. They were about to be moved when a mob attacked with saws, hammers, pickaxes and crow bars, damaging the building beyond repair and letting the prisoners free. At the time a new larger prison was on the drawing board and this was built on the same site. It required the then Queen Street School to be demolished to make room that caused a bit of an outcry.

Designed by town’s survor, Richard Elsam, the new prison was both sturdy and a grand affair. Surmounted by a classical pediment, on each side of the main entrance were niches for statues. Chains, fetters and a Latin inscription were carved above the doorway and even though it was faced in stucco, the whole was made to look like stone. On the roof was a metal rod from which four fish hung, these, it was said, were designed to go round when prisoners were on the treadmill.

The expenditure on the new gaol between 1820-1830 was £6,169 10s 1d (£6,169. 50p) with an additional £2,076 4s 6d (£2,076.23p) spent on lawsuits. Local contractors brought the legal case over the way the Town Clerk, John Shipdem, organised the tendering process. The costs included £71 9s 6d (£71.47p) spent on legal fees defending Elsam against an indictment for perjury. The post of the town surveyor, at that time, was contractual and Elsam’s day job was that of a builder, indeed, he designed and built the Round House for Shipdem. This was destroyed in World War II and replaced, on Camden Crescent, by the architecturally famous but later demolished  Dover Stage.

Maison Dieu, former Town Hall, the four-storey prison can be seen on the right, the site of the present Connaught Hall. Dover Museum

Although Dover Mayor and Jurats were also the magistrates, separate books were kept for accounting purposes. Thus, it was the magistrates’ account that paid for the building and maintenance of the gaol. When another new, larger, prison was built in 1836 at the Maison Dieu, they sold the Gaol Lane prison to the Corporation. The Corporation immediately found a private purchaser and stood to make a nice profit. They then realised that the new Dover Police Force, which had come into on 20 January that year, required a purpose built police station and lock-up. Thus, they tried but failed to rescind on the deal, however, on 2 October 1837, the Mayor, William Cocke, and the Market Committee repurchase most of the site, paying £555, at a public auction. On the land not required for the police station, the Market Hall was eventually built.

In the meantime, a new town gaol was built as an extension on the Ladywell side of the newly acquired Maison Dieu. This sixty vaulted, four storey, brick prison had cells to accommodate 40 men and 10 women. The main punishments were a treadmill and recycling oakum from old tarry ropes and cordage so that the unravelled fibres could be used for caulking and mat making.

A Bolton treadmill was installed in 1849 at the cost of £9 3s 6d (£9 17.5p) and two years later six more machines were ordered. Following complaints that it they were dangerous, in October 1859, to prove this was not the case, the strongest council tried it. After a few minutes he complained that he had quite enough and wanted it stopped. The Warder pointed out that the mechanics had been set for the shortest time – twenty-minutes – and that it could not be stopped! The councillor, supposedly collapsed, and William H Bodkin, Dover’s Recorder 1834-1874, ordered that the treadmill was only to be used for the fittest prisoner. A new treadmill was installed about 1865.

About this time, national prison reforms were being instituted making the gaol on the Ladywell side of the Maison Dieu obsolete. To accommodate the new prison in the basement, the floor of the Stone Hall was raised and a new main entrance was built with steps outside to reach it, as we see today. The prison opened in 1867 and included a small chapel, infirmary, single sex exercise yards and free medical attention. The old four-storey gaol next to the Maison Dieu, which opened in 1834, was demolished in 1877. 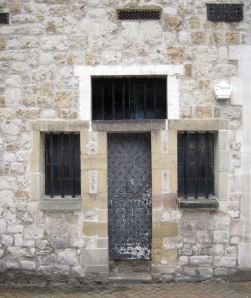 Old Police Station on south side of the Maison Dieu

The Borough Prison Jurisdiction was abolished under the Prison Act 1878. What to do with the old prison became the centre of council and public debates and in January 1879 plans were announced. It was going to be converted into municipal offices, so that the whole of Dover Corporations business could be conducted under one roof. However, with the exception of part of the female wing, the prison was demolished and a new police station was built. The entrance, opposite Biggin Hall, can still be seen.

In 1934, after years of complaints from the Home Office, the council considered building a new police station with cells. This finally opened on 4 October 1940 in Ladywell. The defunct police gaol in the Maison Dieu was opened as a tourist attraction in 1988 but closed eleven years later.

I am a local historian, whose love of Dover has lead to decades of research into some of the lesser known tales that this famous and beautiful town has to tell.
View all posts by Lorraine →
This entry was posted in Courts, Crime & Punishment, Dover Prison, Dover's Prison, Dover's Prison, Maison Dieu - Former Town Hall, Market Square. Bookmark the permalink.
Loading Comments...
%d bloggers like this: