Dover has been in the front line of many aspects of world history one of which is aviation. The first aerial crossing of the English Channel took place from Dover, on Friday 7 January 1785 by Dr. John Jeffries (1744–1819) and Jean-Pierre Blanchard, (1753–1809).

Blanchard was born near Rouen, France,  into a poor family. He became fascinated with the idea of flying from an early age but when Joseph and Jacque Montgolfier succeeded in launching the first man-ascent in 1783, Blanchard became obsessed. His ambition was to cross the Channel and by training and working hard to raise finance, he became a professional balloonist. 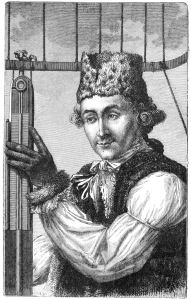 Jeffries, a physician from Boston, Massachusetts, was a self-imposed exile. He had left the US after the trial of British soldiers following the Boston Massacre of 5 March 1770, when five civilians were killed and six others were injured. Jeffries had been a principal witness for the defence – the defence lawyer was John Adams the future American President. Six of the soldiers were acquitted while two others were found guilty of manslaughter and were punished by having their hands branded. This caused a great deal of disquiet in the US and is said to have been one of the precipitating factors of the American War of Independence (1776-1783). Jeffries was wealthy and interested, from a scientific perspective, in aerial locomotion.

Jeffries came to England where Blanchard, who was in London at the time was trying to raise money for a flight across the Channel. Blanchard invited Jeffries to make an ascent from Grosvenor Square. This raised a great deal of interest and the spectators included the Prince of Wales, the future Prince Regent/George IV (1820-1830). The flight lasted two hours and came down near Dartford, Kent, by which time Jeffries said he would pay all the expenses for the proposed cross-Channel flight. This was to cost him about £700.

In February 1784, J.A. Jacobs released an unmanned hydrogen balloon from near Sandwich, on the East Kent coast. This landed at Warnton, France, three miles from Lille, and was given international coverage by the media of that time. In the interviews, Jacobs said that he intended to cross the Channel by balloon before the year was out. This galvanised Blanchard and Jeffries to try and beat him as it did many others. 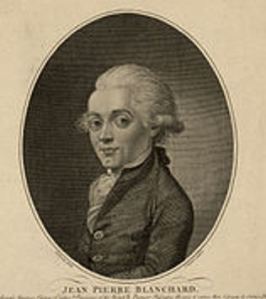 By the time Blanchard and Jeffries arrived in Dover, towards the end of 1784, Jacobs had still not made the intended flight, but there were numerous other balloonists, in the town all intent to be the first to make the crossing. Blanchard and Jeffries therefore planned to undertake the crossing as soon as possible, at least before the Christmas festivities had started. Inclement weather conditions, however, made this impossible.

Early on the morning of Friday 7 January 1785, they were told that another balloonist had left Dover by hoy (A small sloop-rigged coastal ship) with the intention of making an aerial crossing back to England that same day. The weather however, was favourable in making the crossing the other way as a gentle northwest wind was blowing. Thus the pair decided that their flight would also take place that day.

At 09.00hrs, at the same times as the morning firing of the three guns at Dover Castle, Blanchard and Jeffries began inflating of their hydrogen balloon. This was take two and a half hours during which time a boat was attached, in which the cargo including oars – Blanchard believed that he could steer independently of the wind – were installed. They also loaded on board a compass, barometer, nine bags of sand ballast, anchors, lifejackets, a bottle of brandy, biscuits, a bag of apples and the English and French ensigns. Added to this was a large inflated bladder containing a number of letters described as being ‘from people of the first distinction in this country to several French nobility.’

An account of the time tells us that the men were wearing frock coats, dimity waistcoats, nankeen britches, white silk stockings and shoes festooned with black silk ribbons. Their hats were covered with japan (silk) to which were fixed cockades from which arose a small ostrich feather. 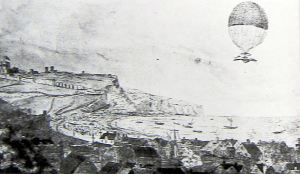 At 13.07hrs another gun was fired from the Castle – said to be the Queen Elizabeth’s Pocket Pistol* – and the spectators that had gathered on the Castle slopes and along seafront, hushed. Slowly the balloon rose from the Castle grounds and the crowds began to cheer, which was acknowledged by Blanchard who stood up and bowed, then removed his hat and waived his ensign.

Several times during the journey, the balloon came down almost to sea level, which the two men dealt with by first jettisoning the cargo and then the clothes they were wearing! They landed in a clearing in the Forêt de Guines, about six miles south of Calais, France and the flight had taken two and a half-hours. 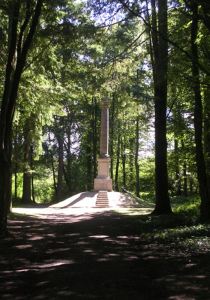 By this time, both men were almost naked and extremely cold but crowds gathering, including the local magistrates! Although the flight had been successful, Blanchard and Jeffries main concern was their lack of attire but the magistrates provided them with appropriate dress! Afterwards the two men were invited to a grand reception in Calais town hall and Jean Pierre Blanchard was presented with the Freedom of the town. Later, Louis XVI (1774-1793), awarded him a substantial pension.

Dr Jeffries was presented with the Freedom of Dover and local dignitaries, including the then Lord Warden, Frederick North, Earl of Guilford, suggested that a monument should be erected to both men. This never materialised but there in one in the Forêt de Guines, in France, at the spot where the balloon landed. 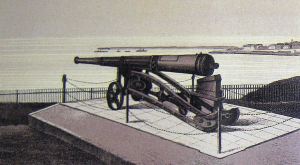 * The Queen Elizabeth’s Pocket Pistol is a cannon that was made in Utrecht in 1544 by Jan Tolhuys as a gift for King Henry VIII. It is a brass Basilisk and was said to be capable of firing 12 pound shot over seven miles but this is an exaggeration. It is beautifully decorated and bears an inscription that is open to many translations; I am of the understanding that it reads:

The cannon can be seen at the Castle on a replacement carriage that was made in the 18th century from captured French guns.

I am a local historian, whose love of Dover has lead to decades of research into some of the lesser known tales that this famous and beautiful town has to tell.
View all posts by Lorraine →
This entry was posted in Aviation, Blanchard and Jeffries - The first Aviators to cross the English Channel. Bookmark the permalink.
Loading Comments...
%d bloggers like this: