Biggin Street is an ancient and part of the main thoroughfare through the town of Dover. Starting from Market Square at the south, what is now a paved precinct and shopping area includes Cannon Street and then Biggin Street.  Back in 1895, the buildings on the west side of Biggin Street, some dating from Tudor times, were demolished and the present buildings were erected. One of the new buildings has an ornate Dutch gable and in 1911, it was converted into a picture house that extended over the vacant ground behind. 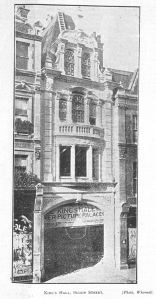 Dover’s Picture Palace Co. Ltd, a local syndicate made up of Messrs G H Geddes, Pessers, Moodie, Wraith and Gurr and managed by theatrical impresario, Manville Morton, spent £8,000 making what was named King’s Hall as luxurious as possible. Designed by architect, A H Steele and built by Hayward and Paramor, the interior was 100-feet (30.5-metres) long, 60-feet (18.3-metres) wide and 30-feet (9-metres) high, with no supporting pillars to obstruct the view. The stage was 36-feet (11-metres) deep with a proscenium 32-feet (11.6-metres) wide.

Seating 800 people, the picture house had a magnificent organ and a permanent string orchestra. On 29 October 1911, this most ‘luxurious picture palace within a 75 miles radius’ opened and on show was Kinemacolor pictures of George V (1910-1936) and the German Kaiser Wilhelm II (1888-1918) at the unveiling of the Victoria Memorial in London. Kinemacolor was invented by George Albert Smith of Brighton in 1906 and was used commercially from 1908 to the outbreak of World War I (1914-1918). The town’s folk flocked to the new wonder, not only to see early cinematic productions but theatrical shows and concerts.

During World War I, Kings Hall changed hands and Harry Day’s Amusements Ltd, a provincial music-hall syndicate, became the new owners. Harry Day (1880-1939), a colourful character, was a Colonel in the army at time. Following the War, he became a major theatrical entrepreneur putting on shows at the Palladium and other major London theatres. In 1922, he stood for Parliament as an Independent candidate for Kingston-upon-Thames but did not win the seat. He then joined the Labour Party and was elected to represent Southwark central in 1924. He was again successful in 1929 but in 1931 lost the seat regaining it in 1935.

In relation to Dover and the King’s Hall, Harry Day made it clear that he saw the cinema as having great potential and announced all sorts of plans. However, towards the end of the War Spanish influenza swept the country and people were dying daily. Dover Corporation, following government guidelines, insisted that the duration of cinema shows was to be restricted to two hours with at least 30 minutes interval between two successive entertainment’s, during which time the building was to be ventilated. Children were banned from the cinema if their school had been closed due to the infection. Harry refused to comply and went so far as to threaten Dover Corporation with legal action, which caused a great deal of antagonism. Perhaps it was this that galvanised Harry into standing for election to the council and was one of the Barton Ward councillors from 1920 to 1923. 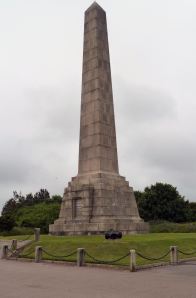 Throughout the War, Edwin Farley had been the Mayor of Dover and in 1919 he set up a committee to raise funds to the erect a memorial on the cliffs near Dover to the men of the Dover Patrol. Harry was invited to join the committee and he contributed £31.10s to the fund. The fund raising was spectacularly successful such that the fund provided for three memorials and a Seaman’s Mission. Harry, as a councillor and a member of the committee was at the unveiling,  by the Prince of Wales, of the Dover Patrol obelisk on 28 July 1921, at Leathercote Point, St Margaret’s Bay. It was reported that he was resplendent in his Colonel’s uniform.

Following this Harry turned his attention to a parliamentary career and ceased to be active in local affairs until a swimming accident occurred in 1925. By that time, he was an MP and put forward the motion that all seaside resorts should provide and enforce the use of inflatable safety rings. These were to be worn around the neck by non-swimmers. The motion did not get any further but Dover Corporation did provide rubber safety belts along the seafront for use in emergency.

In 1928, Theatrical Securities Ltd acquired Harry Day’s Amusements Ltd but he retained the licence of the Kings Hall. Then on 8 January 1930, the state of the arts Granada cinema opened in Castle Street. At about the same time, films with the sound were introduced at Dover’s smaller cinemas such as the Queen’s Hall, Pavilion and the Regent. This had a negative effect on the Kings Hall takings. As a counter measure, the new company decided that instead of installing sound equipment to refurbished Kings Hall as a theatre. This required re-seating and re-carpeting as well as other work and the contract was given to Turnpenny Brothers, of London Road. They started work on Sunday evening 22 December 1930 and completed the job by the evening of the 24th.

The gamble did not pay off and the theatre was sold in March 1933 to Dover Entertainments Ltd. On 1 June 1934, it became part of the Gaumont franchise but retained the name Kings Hall. A large sum of money was spent on installing new sound equipment. As part of the re-opening ceremony, local dignitaries were invited to a special showing of a ‘sound picture’. However, at 05.45hrs on Wednesday 29 December 1937, Mrs Rowley, the manageress of the next-door Central Hotel saw smoke coming from the rear of the Kings Hall, and raised the alarm.

The police, who handled the town’s fire duties, were not concerned as a routine check on the building 45-minutes before showed that all was well. Nonetheless, to satisfy Mrs Rowley two police officers went to investigate. They checked the back, and as before, all was well. They checked the front on Biggin Street and to satisfy Mrs Rowley broke into the main entrance. They then noticed smoke coming from under the inner door leading to the auditorium and opened it. This caused a back draft, and soon flames burst through the roof so high that they were visible for miles around.

The tenants in a flat above the cinema managed to get out and the occupants of nearby Queen’s Gardens were evacuated as a precautionary measure. Dover’s new fire engine, a Leyland with a 4900cc Tiger engine, a 104-foot (31.7 metres) with a Metz turntable telescopic ladder and a water pump, was brought to the scene. Rosetta’s, as the engine was nicknamed, eight hoses worked off hydrants in Biggin Street, Worthington Street, Queens Gardens and New Street. It was estimated that from 06.30hrs to 10.00hrs between 1,200 and 1,500 gallons of water were used.

Apart from the main entrance of the cinema, practically no part of the building escaped from the catastrophe. Builders, Richard Barwick, made it safe but in January 1938, the proscenium wall had to be demolished. In February 1939, new owners, Keystone Cinemas Ltd, submitted plans for rebuilding the cinema to a design by Frank Verity & S Beverley. Work started in the summer that year and was completed in 1940 when the country was at War (World War II – 1939-1945). The new cinema was requisitioned by the Royal Navy for training in the use of gunnery aiming instruments.

Following the War, having been acquired by the Odeon group, the building was restored and reopened as a cinema on 14 July 1947. By 1951 it had been renamed the Gaumont but in November 1960 it was closed. The following August the building reopened as a bingo hall with sessions four evenings a week.

I am a local historian, whose love of Dover has lead to decades of research into some of the lesser known tales that this famous and beautiful town has to tell.
View all posts by Lorraine →
This entry was posted in Buildings, King's Hall Gaumont Cinema and Gala Bingo Hall - Biggin Street. Bookmark the permalink.
Loading Comments...
%d bloggers like this: