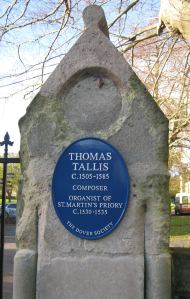 Thomas Tallis (circa.1505–1585), one of England’s most important composers of his time, started his career in Dover. His first appointment was that of the organist of Dover Priory in 1532. The site of Dover Priory is now that of Dover College and on the stone gatepost is a blue Dover Society plaque dedicated to Thomas.

Thomas was born about 1505 but little is known about his life until he was appointed to the post of organist at Dover Priory. Because of his profession, there is little doubt that his early years were spent as a chorister possibly at Canterbury Cathedral. He certainly had East Kent connections and these he maintained throughout his life. It is feasible that it was while Thomas was at the Dover Priory that he composed Missa Salve Intemerata, his earliest known work.

However, the days of the Priory were numbered for Henry VIII (1509-1547), through the Act of Supremacy of 1534 – when the Sovereign was proclaimed the supreme had of the Church of England – instigated the Dissolution of the Monasteries. During the years that followed all the monasteries, priories, convents and friaries in England and Wales were closed down. This enabled Henry VIII to appropriate the income and dispose of the assets of the former establishments but as for the former incumbents, they were left without work or homes. Further, the services to the community they had for centuries provided, were lost. 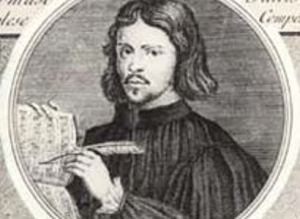 Dover Priory ceased to exist on 16 November 1535 but whether Thomas stayed to the end is unclear. Two years later, Thomas was in the choir and possibly the organist at St Mary-le-Hill in Billingsgate, London. He then moved to the Holy Cross Abbey, Waltham, Essex until that was Dissolved in March 1540. Although out of work again, Thomas did not receive any gratuities when he lost his jobs. He was then accepted as a clerk at Canterbury Cathedral and was in the choir. Three years later, he had been accepted as a ‘gentleman’ (lay singer) of the Chapel Royal.

The Chapel Royal was not, nor still is, a building as such but an establishment of the Royal Household. When Henry VIII came to the throne it was a body of priests and singers whose job it was to serve the spiritual needs of the sovereign. Following the Dissolution of Monasteries, Henry retained the Chapel Royal for which, in 1531, he had a specific building constructed in St James’ Palace. Of note, in 1540 the ceiling was painted by Hans Holbein in honour of Henry’s short-lived fourth marriage to Anne of Cleves.

Part of Thomas’s duties, within the Chapel Royal, was the musical education of all three of Henry’s children – Edward VI (1547-1553), Mary I (1553-1558) and Elizabeth II (1558-1603). This, Thomas undertook and remained a member of the Chapel throughout their reigns. He married widow Joan Bury during Mary I reign and lived in Greenwich. As he became more established, his earnings increased and he was given leases of property, mainly in east Kent. Yet, through a succession of monarchs, with diverse religious views, Thomas, it would seem, managed to remain true to the Roman Catholic faith.

Thomas was to remain with the Chapel Royal for the remainder of his life and eventually became the choir’s most senior member. The financial security and tenure together with working with notable singers, nurtured his talents that resulted in most of the works that survive today. Sadly, the Chapel Royal music books of Thomas’ time have not survived so much of his work that comes down to us today, comes from other sources. From these, experts have identified when most of compositions were written. 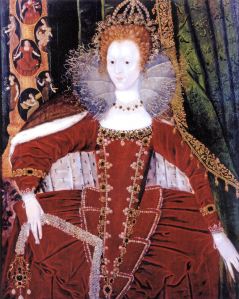 It would seem that although Henry VIII had broken with Rome he retained most of the Catholic traditions and this is reflected in Thomas’s work of that period. During the reign of Protestant Edward VI, English texts were introduced and it is Thomas’s work at this time that has given him that accolade as one of the founding fathers of Protestant church music. Mary I, was a staunch Roman Catholic and Thomas, without doubt returned to traditional settings for his work. Following Protestant Elizabeth I ascending the throne changes was probably made accordingly but as time progressed, it would seem that the political climate of that time had little bearing on Thomas’s work.

Thomas died on 23 November 1585 and was buried at St Alfege Church, Greenwich. The site was marked with a brass memorial but was destroyed during World War II. Today, Thomas ranks among the most performed, recorded, researched, and respected composers of Tudor England. 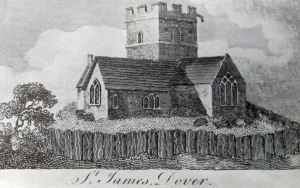 At the time the Dissolution, not only did Dover’s Priory suffer but all the other religious establishments in the town. That is, with the exception of the old St James’ Church the ruins of which can be seen. However, following a petition from the town’s folk, Henry VIII relented over St Mary’s Church and allowed it to stay. Nonetheless, it would seem that the quality of music that Dover had experienced before the Reformation was lost for the next two hundred years.

In 1742, with money raised by subscription and a generous donation by the Dover’s Cinque Ports Pilots, an organ was bought for St Mary’s Church. Following this, there is ample evidence that music again became part of the fabric of the town. There were musical evenings, both large and small orchestras and a proliferation of shops selling sheet music and musical instruments.

Following the opening of Connaught Hall, in the Maison Dieu,  in 1883 there were choral recitals by the Dover Harmonic Society. The singers were accompanied by the orchestra of Dover Amateur Musical Society, whose members included muscians from the military bands stationed in town. In 1892 Dr Edward Ferrand Astley (1812-1907) established a town choir and within three months the Dover Choral Union was formed whose leader was the Borough organist, Professor Harry J. Taylor. Their first concert featured Mendelssohn’s Hear My Prayer and other works and proved a great success. 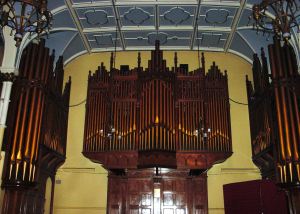 Professor Harry J. Taylor was the musical director for the Dover Pageant of 1908, for which he composed All Hail to Thee Dauntless Dover – this is still sung at the annual Dover Festival Prom Concert. After a discussion with Professor Taylor, Dr Astley bought the magnificent organ that can still be seen in Connaught Hall. This was officially given to the town on Wednesday, 5 November 1902 and cost over £3,000. Fitted with electronic action throughout, it was nationally applauded as  ‘a veritable triumph in organ building.’ Professor Taylor was in charge of the instrument until his death in 1936. He also composed a number of works and these were central to the acclaimed memorial concert that year. 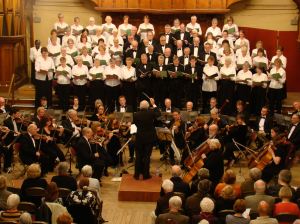 Following World War II, in 1945, the Dover and District Music Club was formed under the Chairmanship of Sydney Clout. The next year John Stainer formed the Dover Orchestra, the Leader of which was also Sydney Clout. Two years later the Choral Union, renamed Dover Choral Society, took to the stage under a new conductor, Wilfred Holland, the Borough organist and head of music at Dover College. When he left for Australia, John Stainer was appointed the director. Miriam Knights (died 2002) came to Dover in 1946 and conducted 12 different choirs winning more than 300 awards at festivals and competitions. One of the choirs, in 1970, appeared in the television programme Opportunity Knocks. In 1952, Doris Knight joined the Choral Society and enjoyed her 100th appearance as a participating memberof the Dover Choral Society in 2003 – singing alto, Doris has, at the time of writing, taken part in 116 performances! 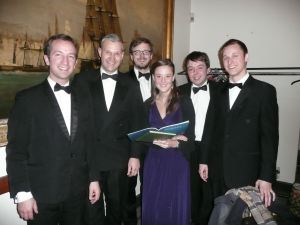 In 1960 Ross Andersen was appointed conductor and musical director, followed by Geoffrey Beadle in 1968. He was succeeded, twenty years later, by Michael Foad and in 2005, Michael Lewis, who also conducts the Snowdown Colliery Welfare Male Voice Choir, was appointed. In November 2012, Micheal Lewis passed the baton to Stephen Yarrow, who founded and directs the Pharos Chamber Choir. The Society continues to put on two major productions every year and Stephen Yarrow’s debut concert, in March 2013, was Haydn’s masterpiece The Creation.

In May 1964, Bryan Anderson, Head of Music at Astor Secondary School and Musical Director of the Dover Operatic and Dramatic Society (DODS) brought together a group of singers. Specialising in Madrigals and unaccompanied Tudor church music, such as Tallis’ work, Bryan Anderson and Friends, as they were called, they quickly proved popular. Four years later, when Bryan moved to Bristol, the group continued as the Anderson Singers. Alf ‘Dusty’ Miller, took over the role of conductor until his death in 1981. The following year the singers were under Ralph Harding, organist at St Peter and St Paul’s Church, River, followed by Ann Wadey, one of the original singers and also the then musical director of many of the Astor Secondary School musicals.

Ann continued until 1993, when Stephen Yarrow, now organist and choirmaster at St. Mary’s Church, Dover, succeeded her. Three years later, however, the Anderson singers gave a ‘Farewell Concert’ at the River Church. In February 2003 Stephen Yarrow founded the Pharos Chamber Choir and their first concert was at St Mary’s Church on 25 October that year. The guest soloist was Jean Pearson (soprano).

Since then they too have been much in demand and together with the Choral Society, the annual Festival Prom Concert – one of the major highlights of the year – Dover’s many school choirs, together ensure that Dover’s choral heritage lives on. Further, Gareth Malone, from BBC2’s ‘The Choir: Sing While You Work’ worked with a group of choristers from Dover’s P&O Ferries in 2013 … and they won the competition!

Returning to Thomas Tallis, the Dover College music school is named after Thomas Tallis and on the school gates is a Dover Society blue plaque to his memory. On Saturday 19 May 2018 Prince Harry and Meghan Markle were proclaimed husband and wife in a ceremony at St George’s Chapel at Windsor Castle, watched by a global audience. During the service the Choir of St George’s Chapel sang the motet, If Ye Love Me by Dover’s Thomas Tallis!

I am a local historian, whose love of Dover has lead to decades of research into some of the lesser known tales that this famous and beautiful town has to tell.
View all posts by Lorraine →
This entry was posted in People, Tallis Thomas and Dover's choral tradition. Bookmark the permalink.
%d bloggers like this: