In 1908, Dover put on a magnificent Pageant under the direction of Louis Napoleon Parker (1852-1944). He was a well-known dramatist and composer, born of an English mother and American father in Calvados, France. Between 1877 and 1896, he had been the director of music at Sherborne School, Dorset.

Parker had staged the Sherborne Pageant in 1905, held at the town’s Castle and featuring 700 performers wearing a ‘panorama’ of costumes and ran for three consecutive days. The Pageant was to commemorate the 1200th anniversary of the founding of the town by St Ealdhelm. A year later Parker produced the Warwick Pageant in the grounds of the Castle there. This ‘sketched in dramatic form episodes covering 1700 years of the town’s history’ and was ’embellished with choruses, songs, dances and marches.’ 2,000 people took part in the final tableau and the show was put on in July and ran for seven consecutive days. People flocked from all over the country to see it! 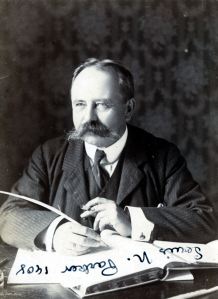 The success of the two pageants led to other towns either putting on their own shows or hiring Louis Parker. Canon Henry Bartram, the Vicar of St Mary’s Church, attended the Sherborne Pageant and was so impressed that he eventually persuaded Parker to put a pageant on in Dover. Parker agreed but as money was involved, Dover Corporation needed some persuading. The great man came to the town addressed the council on 19 February 1907 and they agreed to hold a Pageant, under Parker’s direction, the following year.

Over the next eighteen months local blacksmiths, carpenters, decorators, seamstresses etc., worked hard, in they’re own time, creating scenery and costumes. Some 2,000 performers rehearsed while the lead characters, mainly drawn from the higher echelons of Dover’s society, had studio photographs taken of themselves in their costumes. 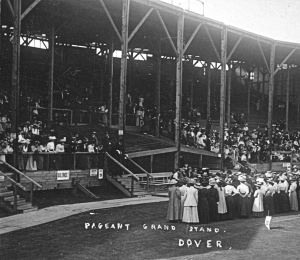 The show was performed every day in the afternoon, from July 27 to August 1, in the grounds of Dover College. At each performance there were 5,100 reserved seats ranging in prices from 21s (£1.05p), 10s6d (52½p), 5s6d (27½p) and 3s6d (17½p). To encourage visitors from out of town to come, the two railway companies that served Dover, South Eastern Railway Company and the London, Chatham and Dover Railway Company, offered reduced railway fares for ticket holders. Albeit, like many events in Dover, it was almost ruined by malicious rumour mongering. So bad was this that in May 1908, Parker held a grand ‘at home’ in Connaught Hall where local beauties dressed up as ‘Muses‘ and  ‘Bacchus’ with handsome assistants were on hand to provide refreshments.

During the week prior to the formal opening, the folk of Dover were invited to watch the final rehearsals for a small charge. On the Saturday of that week 5,000 local children came as well as soldiers stationed in Dover. Everything was auguring well when, on that day, an unexpected problem arose. By the sanction of Dover magistrates, the nearby Christ Church vicarage, on Folkestone Road, was licensed for the sale of intoxicating liquors throughout the duration of the Pageant. However, the vicar, the Rev. Hugh Falloon, who did not reside at the vicarage, returned from holiday. He was a teetotaller and when he found out what was happening, took possession of the vicarage! Demanding that all the ‘inappropriate’ furnishings be removed he still stood his ground until the licence was transferred to other premises! 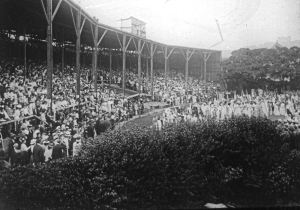 The day finally arrived and the weather could not have been better. The event was introduced by Dover’s Mayor, Walter Emden, and formerly opened by Sir John Bell, Lord Mayor of London. In attendance were all the Mayors of the Cinque Ports and other Kent towns. Representatives from Calais, Antwerp and Ghent were also there. As guests of the town’s MP, George Wyndham (1863-1913), a Royal party came to see the spectacular on the Tuesday. This included, H.R.H Princess Alexander of Teck, (1883-1981) – grand daughter of Queen Victoria, H.R.H Princess Helena of Waldeck and Pyrmont (1861-1922), H.R.H. Princess Louisa Augusta of Schoswig-Holstein, Sibell, Countess Grosvenor wife of George Wyndham (1855-1929) and Kathleen Emily Wellesley Bulkeley-Williams, Duchess of Wellington (1848-1927). There were also several other titled aristocrats. The event was covered by the national press with the Times reporting, ‘Dover pageant was the best managed spectacle we have seen.’

The theme of the Pageant was England’s relationship with France over the centuries. This was 1908 and four years after the Entente Cordiale (08 April 1904) that fostered Franco-British relations. Starting from the days the Romans arrived at Dover, the scenes were spectacular. Dover being razed to the ground depicted William I (1066-1087) arrival in England, his troops burning the town and the town being rebuilt. This centred on St Martin le Grand, the monastery that once dominated the town and stood near the Market Square. King John’s (1119-1216) ultimate submission to Rome was shown followed by a scene depicting Hubert de Burg (1160-1243), as the builder of the Maison Dieu. A boat, of the actual size and shape as the ones used by the Cinque Ports fleet, was built, while the audience watched, on the stage each day. On completion, a full complement of 21 crew – as designated in the Cinque Ports Royal Charter of 1155 – climbed on board and unfurled a blood-red sail bearing the Invicta – the white horse of Kent.

The episodes that followed were equally as spectacular, with the seventh and last episode appertained to the arrival of Princess Henrietta Marie of France (1609-1669) to meet her future husband, Charles I (1625-1649), at Dover Castle. This was all in French and written by Louis Tierceline a distinguished French poet. It was performed by the inhabitants of Douai, between Lille and Arras, northern France and finished with the entry of nine French Princesses that became Queens of England. The final tableau included Dover’s 43 colonial daughters and all the characters and animals that had taken part.

Dover Corporation’s organist, Professor Harry J. Taylor, was the music director and composed ‘All Hail to Thee Dauntless Dover’ for the occasion. He also conducted the orchestra made up of 100 musicians that included the complete band of the Queen’s Own Royal West Kent Regiment. The narrative chorus was sung by a choir of 80 and the madrigal by a chorus of 100 voices. Charles Long was the master of the dance routines and local art teacher, William East, designed the costumes. Lorna Bomford, better remembered for her activities in Dover Women’s Suffrage, designed and organised the making of the armour and weaponry.

After it was over there was no doubt that the event had been an unqualified success in almost every sense. It was favoured throughout with fine weather, the staging magnificent, acting was splendid and the music and singing excellent. Although American and French visitors had booked the best seats the attendance, when the full prices were charged was, however, poor. This had left a deficit of £1,948 and the event was classed as a serious failure. The guarantors covered the amount but in the inquiry that followed it were found that the income was over estimated and the expenditure, under estimated. No account was taken of the positive knock-on effects on the town’s economy. 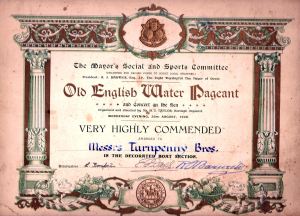 By the 1920s nostalgia began to surface again and in 1928 an ‘Old English Water Pageant and Concert on Sea’, was staged in the harbour. More akin to a carnival on water, local firms decorated their own boats for which they could win prizes. It was organised by the
Mayor’s Social and Sports Committee, the president of which was the Mayor, Richard Barwick. The adjudicators, besides the Mayor, included Lorna Bomford. The event was to raise money for local charities and Turnpenny‘s, the furniture shop’s entry was highly commended.

It was not until 1982 that local visionary, Mike McFarnell, breathed new life into the Pageant concept. In September that year, he announced that in conjunction with the English Tourist Board’s Maritime England Year, he was going to stage a Pageant in Connaught Park on May Day bank holiday Monday 1983. It was a success and quickly caught the town’s imagination. From the outset, both this author’s daughters were involved and in 1990, the author dressed up as Elizabeth I and joined in. Michael Van De Hoven, a master at Dover College, was Sir Walter Raleigh. The photograph features in Derek Leach and Terry Sutton’s book, ‘Our Town, Dover.’ Albeit, you can imagine my surprise when, four years later, a photograph taken of me that day was used to advertise Dover!

By 1992, I was actively involved as Assistant Pageant mistress with a script by local teacher and dramatist, the late Noreen Thomas. It was hard work but great fun especially as nearly everyone in the town was willing to lend support. In the end, more than 300 people took part. Even the weather showed diffidence to the national weather forecast which said it would be cloudy and cold … it was the hottest and sunniest day of the year! 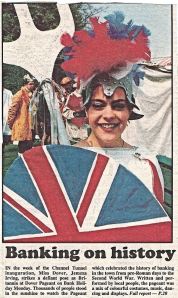 The official opening of the Channel Tunnel was on 6 May 1994, when unemployment in Dover was reaching 10%. On that day in Connaught Park, 600 Dovorians, including most of Dover District Councillors, took part in the Dover Pageant. The spectacle was watched by a further 3,000 and filmed by ‘France Trois’, who aired it throughout France at prime time! I still have the video. However, my over-riding memory is the photograph of Miss Dover, Jemma Irving, striking a defiant pose as Britannia, which up-staged all the published photographs of the high costing Channel Tunnel celebrations!

Pat Mills took over making costumes from me for the 1999 Pageant. She also made 44 beautiful banners representing Dovers around the World. As before, Dover’s colourful history, written by Noreen Thomas, was told in glorious weather with town’s folk and councillors taking part. Mike had moved the venue back to Dover College, which lent atmosphere to the whole display and also stopped people sneaking in without paying! Three years later Mike and Noreen, along with a host of Dovorians, brought the town’s colourful history to life again in the historic Dover College grounds. So popular was the spectacle that there were two performances on consecutive days. 2005, and again an audience of nearly 1,000 were treated to an afternoon of the town’s  history, splendour, entertainment, song and dance but sadly, in 2008 the last Pageant was held on Sunday 8 June … for the time being …

Mike McFarnell, the Pageant Master, however, is still full of creative ideas. In 2012 he organised the spectacular Dover Tattoo, held on 1 and 2 June on the former Connaught Barracks site. Unfortunately, well over three thousand people, who attended the first evening’s display, saw two of the three members of the Princess of Wales’s Royal Regiment Tigers freefall team make crash landings with one requiring hospital treatment. Although the accident did dampen spirits, the remainder of the event was, as expected, produced with military precision and provided first class entertainment finishing with magnificent fireworks displays.

I am a local historian, whose love of Dover has lead to decades of research into some of the lesser known tales that this famous and beautiful town has to tell.
View all posts by Lorraine →
This entry was posted in Dover Pageants, Societies, Culture and Entertainment. Bookmark the permalink.
Loading Comments...
%d bloggers like this: