British Destroyers and the Zulu, Nubian and Zubian 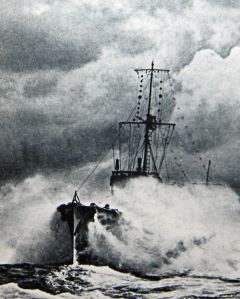 During the latter part of the 19th century a number of middle-ranking naval officers were expressing concern about the extent of tiny torpedo boats being built by some European countries. Little notice was taken but by the 1890s, many of these officers had been promoted and consideration was being given to the means of countering the perceived menace.

The torpedo boats they were concerned about were small and fast. Therefore, an equally fast or even faster vessel was needed with sufficient ammunition to blow the torpedo boats out of the water. In 1893 the first destroyers, initially called ‘torpedo boat catchers’ were built. With a displacement of 220-tons they had a speed of 27-knots and were armed with one 12-pounder, three, and later five, 6-pounders. For their own protection torpedo tubes were mounted that effectively made them a ‘super-torpedo boat’ or, as they were renamed – destroyers.

At this time the destroyers were little more than tin boxes crammed with machinery. Even in moderate weather, when travelling at speed, they were very uncomfortable. They were difficult to control and the sea washed over the low turtleback bows and the unprotected bridge. The Admiralty, in an effort to ameliorate these conditions increased the amount paid to the officers and men who manned them. 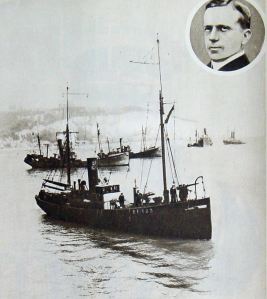 Between 1905 and 1908, the Royal Navy ordered destroyers of the Tribal or F class, all of which saw active service during WWI, many as part of the Dover Patrol. All were of a similar in size, speed and armaments. They could make at least 33-knots (61 km/h), had two oil-fired boilers and the same defence weapons. In addition, as a class, they were the first British destroyers to have two masts; the aft was a light mainmast. To allow different approaches to be tried within the specific limits, the Royal Navy left the design details to the different shipyards. Thus, there were also significant variations between each ship.

Initially fifteen ships were ordered, but only the twelve were built and the first to be launched was the Cossack in February 1907. She was followed by the Ghurka, Mohawk, Afridi, Tartar, Saracen, Amazon, Nubian, Crusader, Maori, Viking and finally Zulu, commissioned in March 1910. More followed and at the outbreak of World War I (1914-1918), the newest British destroyers were vessels of nearly 1,000-tons, with a speed of 33-knots and an armament of three-4-inch guns and four torpedo tubes. Oil had superseded coal on all the destroyers. 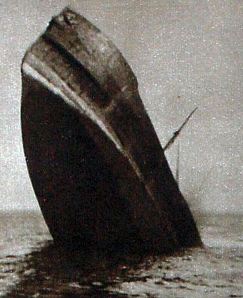 Britain declared war on Germany on 4 August 1914 and the first German submarines appeared in the Channel around the middle of September 1914. They had been ordered to sink allied merchant vessels without giving notice. The Aboukir, Hogue and Cressy were sunk off Zeebrugge. All three had men on board from Dover. The first neutral vessel attacked was the Belridge, a Norwegian tank ship on 19 February 1915, which was quickly followed by other attacks on shipping. In response, the Admiralty sent eleven of the Tribal class destroyers one of, which was the Zulu, built, by Hawthorn Leslie shipyard, Newcastle. Not long afterwards, the Nubian, built by John I Thornycroft, Woolston, Hampshire shipyard and launched on 21 April 1909, joined the Dover Patrol. 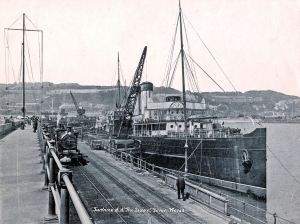 The destroyers quickly proved their worth when on 4 March 1915, the Ghurka and Maori sank the U8 off Dover. Four officers and 25 of the crew were captured. They  were marched through town much to the great excitement of the locals to the Castle before being taken to Chatham. By 1916 time, the loss of destroyers and the lack of replacements had reduced the total number to ten. On the night of 26 October that year the former cross-Channel ferry, Queen, deployed as a transport ship, was blown-up. The crew were picked up and brought back to Dover. Six boats that were part of the Channel Barrage – a huge net, with minefields on either side and strung across the Channel suspended from fishing boats and buoys – were lost. 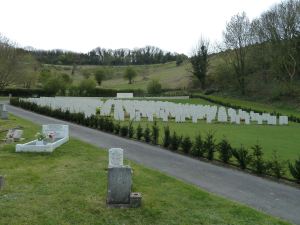 The Dover built destroyer Flirt, under the command of Lieutenant Richard Kellett, was lost with of all but nine of her crew and the Nubian, Commander Montague Bernard, during the course of a fight off Folkestone, was struck by a torpedo. Sixteen members of her crew were killed and eleven bodies were landed at Dover. The Market Hall was used as a mortuary. Following an impressive funeral, nine of the men were buried in St. James cemetery.

In Parliament, the disasters of that night came under the spotlight and the blame was put on those who were doing their best to defend Dover with inadequate resources. As for the Nubian, badly damaged she was taken in tow but as the wind increased, the tow parted and adrift she went ashore at St. Margaret’s. Within a month, on 8 November, the Zulu struck a mine between Calais and Dunkerque blowing away her stern. The forward section remained afloat and was towed into Calais. 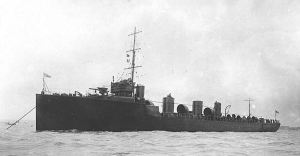 As both the Nubian and the Zulu were of the same class, it was decided to tow the stern of the Zulu and the bow and mid-section of the Nubian to Chatham and weld them together making a new ship! However, even though both ships were of the same Tribal class and had been built within laid down parameters, they had been designed and built by two different shipyards. This meant that they had different frames and a 3.5-inch (89-mm) difference in the beam. Despite these and other problems, the Zubian, as the ‘new’ ship was named, was commissioned on 7 June 1917. She immediately caused consternation to the German High Command as they could not work out which class she belonged. It was not until after Armistice did they learn the truth!

Serving with the Dover Patrol on 4 February 1918, the Zubian sank the mine-laying U-boat, UC-50, off the Essex coast. She was deployed in the Zeebrugge Raid on 23 April 1918 and the Ostend Raid in May. At the Admiralty Prize Court, held on 10 November 1919, an award of £145 was made to the master – Lieutenant Henry James Hartnoll – and crew of the Zubian for the destruction of the submarine. Two days later the Admiralty offered the destroyer for sale along with the Afridi, Cossack and Viking. At the time they were all lying at Immingham on the Humber Estuary. The Zubian was broken up on 9 December 1919 at Fryer Shipbreakers, Sunderland. 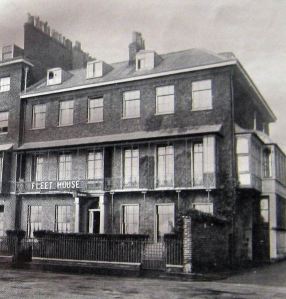 Fleet House, Marine Parade. HQ of the Admiral of the Fleet during World War I – Dover Library

During World War I some 300 destroyers were built or laid down between August 1914 and November 1918. A further 34 flotilla leaders – large destroyers – were also built. During that war, seventy-eight destroyers were sunk and about the same number badly damaged by enemy action, collision or weather conditions. Their deployment ranged from screening the Grand Fleet against submarine attack to taking Cabinet Ministers, military and naval officials across the Channel. They hunted U-boats in home waters and in the Mediterranean as well as conveying merchant shipping through danger zones. They were used to lay mines in the Battle of Heligoland Bight – the first naval battle of the First World War and fought on 28 August 1914. They also served as minesweepers and took part in every major naval action excepting the battles of Coronel (1 November 1914) off the coast of central Chile and the Falkland Islands on 8 December 1914. Of those destroyers with two or more years of service that survived World War I and the subsequent sell off, many were still on the Naval active list at the outbreak of World War II (1939-1945).

I am a local historian, whose love of Dover has lead to decades of research into some of the lesser known tales that this famous and beautiful town has to tell.
View all posts by Lorraine →
This entry was posted in British Destroyers and the Zulu, Nubian and Zubian, World War I. Bookmark the permalink.
%d bloggers like this: