Bowling is one of Dover’s most popular sports and can trace its history in the town from the 1840s. That was when the first legal bowling green opened at the foot of Western Heights. The game has been around since at least the 13th century, in those days players aimed at small cone rather than an earthenware ball or jack. The game quickly caught on but equally as quickly was banned. It was feared it would jeopardise the practice of archery – then important for defence. Nonetheless, the sport remained surreptitiously popular and so in 1541 an Act of Parliament banned the game … Francis Drake notwithstanding!

The Act was not repealed until 1845 but even then, artificers, labourers, apprentices and servants were only allowed to play at Christmas time. Further, the game could only be played on licensed greens, which led to one being excavated near the lower part of Military Road – Bowling Green Lane was so named because of its proximity. Enclosed and strictly private the green was laid for military officers and gentlemen of Dover. 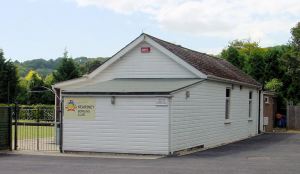 In May 1906, the Dover Institute rented land from Dover Corporation, behind Maison Dieu House, for bowling and croquet. However, restrictions on the sale of intoxicating liquors resulted in the Dover Institute’s Tennis and Bowls clubs giving up the tenancy and constructing a bowling green on a private ground. This was on Dieu Stone Lane and the land belonged to George Bacon of nearby Stembrook Tannery. In the same year, the Kearsney Bowling club was formed with four rinks but played by invitation only.

A year later the Dover Institute’s Tennis and Bowls club mutually agreed to be dissolved and at the same meeting, the Dover Institute Bowling Club (DIBC) was formed. Edward M. Worsfold was elected president, Stephen Knott its first secretary and treasurer, and the club colours were red and black. The Corporation agreed to give the new club exclusive rights to Maison Dieu Gardens green on Wednesdays and Saturdays from 14.00hrs to one hour after sunset. The club retained the lease of the Dieu Stone Lane site and used the green there at other times but, in 1911, they voted to build a pavilion next to the Maison Dieu Gardens green.

The Kearsney and DIBC were joined by a number of other bowling clubs in the area to compete for the ‘Dover Club Cup’. That is until World War I put an end to inter-club matches. Following the War there was a surge of interest and two brothers, George and Donald Campbell, who played at Kearsney, particularly helped this. Donald, the youngest, was President of Kent and County Singles and was the champion in 1922. He went on to play for England in 1926, was appointed the Captain in 1929 and played for the country until 1930. Donald was later awarded the MBE for his services to the game of bowls.

In 1920, the lease expired on the Dieu Stone land and DIBC sold its timber pavilion along with the flagpole, rollers and challenge cups. At Kearsney, in 1924 the members paid £600.00 for their green and in 1926, two more rinks were added. The 1925 Dover Guide waxed lyrically about DIBC’s green saying that it is, ‘in a beautiful sheltered aspect on the Banks of the River Dour is to be found one of the finest and most popular greens in the country.’ That year, thanks to Sir Edwin Farley (Mayor 1913-1918) generosity, the green was extended. The annual Royal Victoria Hospital (challenge) Cup had been introduced and this was usually held on the Maison Dieu Garden green.

Around this time, Buckland Paper Mill employees started to play bowls on the lawn at the Cricketers Arms, in River. Bob Jordon, a mill office worker, county player and member of the Kearsney club, lent his expertise and encouragement. The Buckland Mill Bowls Club, with 30 members, opened in 1929, on a new green adjacent to Crabble Paper Mill where they built a small pavilion. Bert Coleman, who only had one arm, won the first County Badge for the Club in the 1930s.

About the same time the Co-operative Sports Club were given leave to use the DIBC Green and in 1934, the first round of Kent singles were played there. The following year DIBC decided to replace their pavilion, built in 1911, and to change their name to the Dover Bowling Club. Their colours were changed to light and dark blue. Other clubs in Dover, at this time, included River – founded in 1923, Post Office, East Kent Road Car, and the Police. For the most part, the greens were provided by the Corporation.

Bowling was suspended for the duration of World War II and the management of Buckland and Crabble Paper Mills decided to close their factories down for duration. However, 17 members of staff remained on the sites to look after the mills. One night an enemy firebomb landed on their precious bowling green and police sergeant, Peter Steele, ‘retrieved and mounted it on a stand with a suitable plaque.’ After, the Police and Mill bowls clubs played for the ‘Blitz Trophy’ and it is now in the Museum. Later, there was a direct hit on the Maison Dieu Gardens green that created a large crater and it was thought that bowls would never be played there again.

Bowling Blitz Trophy played for by the Police and the Crabble Mill Bowls Club. The trophy is now in Dover Museum

Following the war, bowling quickly became a popular past time again and in 1947, the annual Royal Victoria Hospital Cup Tournament was held at the River bowling club. With the introduction of the National Health Service, the following year, the Tournament was renamed the Stephen Knott Tournament, after the then President of the Dover Bowling Club.

The Maison Dieu Gardens green was repaired and in 1955 the ladies of the Dover Bowls Club were officially allowed to play  for the first time. They were not allowed to play in singles but could play in pairs and triples, but not as singles. The following year it was agreed that they could play in the singles and in 1959 they were allowed to play in inter-club matches, but only, ‘where necessary.’ During that time, three lady members played for Kent County! 1976 saw Barbara Stevens of Kearsney club winning the Kent ladies singles title, the first player from the Dover area to become a champion in the event. 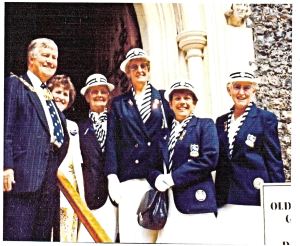 Twelve years later, in 1988 and again in 1990 and 1992, a team of ladies, headed by Ann Smith, from the Kearsney club won the County fours, which enabled them to represented England in the British Isles Championships. Also in 1992, at Royal Leamington Spa, the ladies became the Champions of England! Dover Bowling Club were the runners up in the 1996 Kent County Bowling Association Cox Cup. In the same year, Mick Fisher, of the same club, won the County unbadged singles and subsequently played for the County.

Buckland Mill Bowling Club team, Messrs Friend, Avis, Langley and Fox, who made it to the County finals in 1982. Gateway Bowling Club

In 2004, Buckland Paper Mill Bowling club, using a green in Folkestone, reached the final of the Kent County triples and the semi-final of the English National Championships. Nonetheless, with falling membership the club was considering winding-up. Then the Dover Harbour Board Social Club agreed to help make up the shortfall in funds and construct a new bowling green in Dover. The club was renamed the  Gateway club and on 3 August 2007 began playing at their new home adjacent to the Dover Harbour Board Sports and Social Club at the White Cliffs Business Park opposite the Transport Museum.

River Bowling Club, one of the smaller bowling clubs in the locality lost their clubhouse in 1993 when it was razed to the ground. The following year they opened a new one and in August 2010, they entertained a team from the Royal Hospital Chelsea. It was a return match and the River bowlers were victorious in both – ‘although the captains’ rink was an honourable draw!’

In Dover the game of bowls is alive, flourishing and enjoyed by both participants and observers like me!

I am a local historian, whose love of Dover has lead to decades of research into some of the lesser known tales that this famous and beautiful town has to tell.
View all posts by Lorraine →
This entry was posted in Bowling in Dover, Sports. Bookmark the permalink.
Loading Comments...
Comment
×
%d bloggers like this: