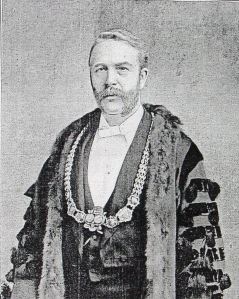 As one looks around Dover, there are still monuments to the work of William Adcock, Mayor 1885 and 1890. These include many of the nineteenth century villas’s that line Maison Dieu Road, Park Avenue, Godwyn Road, Leyburne Road, Castle Avenue, Leighton Road, and Millais Road. Also a number of the shops in Biggin Street.

William John Adcock was born in Nottingham in 1840, the son of a joiner and was admitted to Nottingham Grammar School on 20 January 1851 when he was 9 years and 10 months. William left school at Midsummer 1854 and the comment on his report was that he did well. He then joined the family building business and on its behalf, came to Dover in 1862. This was in connection with the Ecclesiastical Commission contract at Farthingloe and while in the town, he met and fell in love with Elizabeth Reynolds Mowle. She was the daughter of tailor, Reynolds Mowle, Snargate Street. They were married at St James new Church in 1863.

Having decided to stay in Dover, William bought the premises of Thomas Mark, a builder in Townwall Street. Priding himself in the quality of his work, he specialised in building and the business quickly grew. When George Fry’s Maison Dieu building yard, Ladywell, became available William took it over. His reputation for quality workmanship was cemented in 1869, when he won the contract to restore the old St James’ Church – now the neglected ‘Tidy Ruin’ near the swimming pool. He had already proved his worth as one of the builders of St Paul’s Catholic Church on Maison Dieu Road and the census for 1871 shows that he was employing 60 men and 6 boys.

Over the next few years his firm built, Castlemount House, this later became Castlemount School (destroyed by fire in 1973). The quadrangle at Dover College and a number of churches and chapels. His reputation for restoring ancient buildings continued to grow and included the now demolished Old Park Mansion. He was also commissioned to build the military quarters at the Citadel on Western Heights and other military buildings around the town.

Such was William’s reputation as a builder of excellence that although he was rarely the cheapest tender for work, he did win most of the contracts he bid for. Indeed, he was ‘head’ hunted for contracts such as the battery for six guns at Tilbury and the defensive works on the Isle of Grain. When the upper galleries of Admiralty Pier were destroyed by a storm in 1877, the Admiralty specifically named him as the only builder who could be sure to provide an adequate sea/storm defensive.

William won the contract, in 1877, to build St Bartholomew’s Church that once stood on the corner of Templar Street and London Road, to serve the Tower Hamlets district. To Early English designs by the Diocesan Surveyor, Joseph Clark, William’s price for the building was £6,370, the final cost was £7,500. The church was 111-feet long, 55-feet wide, consisting of a clerestoried nave of five bays, side aisles and seated 750 persons. An, apse-shaped chapel was built shortly after as a memorial. The Archbishop of Canterbury Archibald Campbell Tait (1811- 1882) consecrated the church on 22 January 1879.  In 1972 the parish joined with SS Peter and Paul Church, Charlton which made St Bartholomew’s church redundant. It was demolished and flats were built on the site.

However, in January 1878, while William and his wife were away, fire broke out at his Ladywell premises. As the fire raged William’s stables, in which there were several horses, also came under threat. Although the doors were opened and people tried to cajole the horses out, they refused to move. That is, until one of William’s men, a Mr Dodd managed to coax them out and lead them to safety.

The fire also threatened to engulf the Maison Dieu, Maison Dieu House, 6 cottages and a ginger-beer factory. The police, who also ran the fire brigade at the time, were called and luckily as the yard was next to the River Dour water was pumped from the river. Although three fire hydrants were also utilised, William’s premises were completely gutted. Much of the contents of the workshops were insured and a new workshop was erected on the site not long after. However, in those days workers had to provide their own tools and most did not insure them. The Dover townsfolk opened a subscription to buy the replacement tools.

Having spent his childhood in Nottingham’s St James Street, it is of interest that as an adult he lived in Dover’s St James Street at number 56. When he was in his 30s William, joined the Conservative Party, winning a seat in Castle Ward in 1871 and again in 1874. On both occasions he was unopposed so why he chose to stand in the Liberal stronghold of Town Ward in 1877, was not specified. Albeit, he stood against Richard Dickeson and Philip Stiff, two councillors of high repute, and was thrashed. As compensation his Party, who had at the time the overall power under the influence of Joseph Churchward, nominated William as an Alderman. He was give the full term – six years but in 1883, the Conservatives lost overall power and William his seat.

William had bought a large plot of land in the Maison Dieu Fields estate and in 1883 built Leyburne House, on the west side of Leyburne Road and moved in. At the same time he built 22 residences in Harold Terrace and over the next few years sixty more residences in the area. Shelling during World War II (1939-1945) destroyed Leyburn House and a large car park now occupies the area.

In November 1884, William stood in the Liberal dominated Pier Ward  but lost. The following year, with Philip Stiff out of the way due to him having been appointed an Alderman, William stood for Town Ward and won. Immediately, he was elected Mayor, but on 15 November Alderman Philip Stiff – also a builder of high repute, had a heart attack and died. William’s first duty as Mayor was to attend Alderman Stiff’s funeral.  On 25 June 1886, Mayor William and his family received a visit at Leyburn House from the Compte and Comptess de Paris, who called to acknowledge the hospitalble reception given to them on their arrival at Dover! 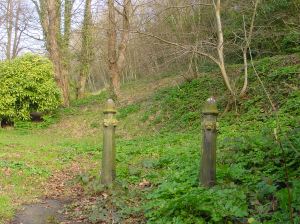 One of the major economic features of the United Kingdom in the nineteenth century were regular booms and slumps. On 4 January 1886, during a slump when unemployment was high, William called a special council meeting to deal with the problem. At that time there was no unemployment benefit and whole families were sent to the workhouse if they had no means of paying their way. At the meeting, William suggested that the council should provide work for the unemployed by building an ornamental zigzag walk running up Castle Hill. The description of what he envisaged included seats, trees, bushes and ornamental shrubs. William gained permission from the War Department, who owned the land. The remains of the zig-zag path can still be seen at the top of Laureston Place, on the opposite side of the road to the top entrance of Connaught Park.

When this was finished the men worked on improving Union Road (now Coombe Valley Road) and levelling the then Pier Recreation Ground. The total costs for these works were £643 and were funded by the council. The labour costs were 2s 6d (12½p) a day per man and William paid. He also ensured that the workers received their remuneration every evening for the day’s work.

With the help of his wife, Elizabeth and eldest daughter Anne and their female friends, they organised meals for the children of the poor. The women collected £171 and the crypt of the Maison Dieu, which had formerly been the town prison, was commandeered. That winter, 17,000 free dinners were provided. During this time, William led a deputation of Dover councillors to the Board of Trade to press for Dover’s harbour to be upgraded into a Harbour of Refuge, but without results.

Although the remainder of William’s first term of office was eventful, it was a public meeting that he called on 5 October 1886 that he was particularly remembered by his contemporaries. This appertained to the establishment of a Girls’ High school in Dover and was a controversial issue. At the time secondary education of girls was not considered of importance and in Dover, even elementary education was seen by a significant number as a waste of public money. Dover College had provided secondary education for boys since 1871 and William, having had a grammar school education, felt that it should be available to girls too. The plan went ahead and the Girls’ High School built in the Paddock and eventually evolved into the Dover Girls’ Grammar School.

Over the next few years William supported William East, the headmaster of Dover’s Art School, then in Northampton Street, for the town to invest in a purpose built combined Art and Technical School. Indeed, William Adcock went as far as making his builders’ yard on Ladywell available for £3,000, Kent County Council (KCC) gave a grant of £12,000 and the Corporation borrowed £11,000, repayable over thirty years. Of interest, the building contract was given to another local builder, William Bromley. The wife of Sir William Crundall, Mayoress of Dover, opened it in June 1894.

In March 1890, William purchased extensive properties, for £2,500, along the High Street in Canterbury belonging to the Delaseaux family. The rental value, at that time, was given as £205 per annum and they were bought on behalf of Edward Lukey, the then Mayor of Dover and son of John Lukey, who ran a wine business in Bench Street. Following the demolition much of the property, William’s firm built the County Hotel for Edward Lukey.

Eight months later William succeeded Edward Lukey as Mayor and again the economy was going into yet another slump. He immediately negotiated the purchase of what is now the Danes Recreation Ground, on behalf of the council. Before his term of office was over, William had the pleasure of ‘kicking off in two games of football and matches there…’ William also backed a project that resulted in the building many of the homes along Buckland Avenue. When his term of office finished William was granted the Honorary Freedom of the town, his citation stated, ‘twice a Mayor, thrice as Councillor, thrice as an Alderman, once as County Councillor and magistrate both for the borough of Dover and the County of Kent.’ In return, he donated the window in the Maison Dieu that depicts King John (1199-1216) and Henry III (1216-1272).

In the mid 1890s, William and his family moved to a new residence, which he built and called ‘Merton‘ in Kearsney. There is now a bungalow on the site. The house was gas lit and had a large stairwell in the centre of which was a gas mantle. In March 1907 William was leaning over the banister to light the mantle when he fell, sustaining an eight-inch gash on his head. The doctor was called who stitched the wound and the shaken William went to bed. Over the next few days, his condition deteriorated and on 4 April 1907, he died age 67 years. William was buried in St Peter & St Paul, River, churchyard and he is still seen by many in the building trade as, ‘the greatest builder to come out of Dover.’

I am a local historian, whose love of Dover has lead to decades of research into some of the lesser known tales that this famous and beautiful town has to tell.
View all posts by Lorraine →
This entry was posted in Adcock William - Builder of Excellence, Builders. Bookmark the permalink.
%d bloggers like this: