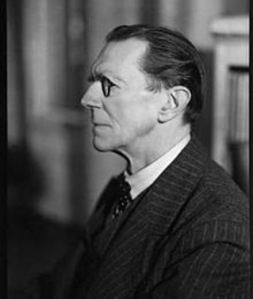 During the dark days of World War II, Dover Corporation devised a plan for the future of the town. Following the War town planner, Professor Abercrombie, was hired to give weight to this plan. Although Abercrombie recognised the importance of Dover harbour, the Professor said that ‘the lifeblood of a town of the nature of Dover is undoubtedly its industry.’ He went on to recommended the demolition of East Cliff and Athol Terrace to be replaced by a wide access road to the Eastern Dockyard – as it was then called. The Dockyard had been earmarked for industrial purposes.

On 1 April 1947, Townsend Brothers returned to the Eastern Dockyard where the company had started and ran its business during the inter-war years . Their ship was the Cromarty Firth, a small coasting vessel of 538 tons gross built by J Lewis & Sons of Aberdeen in 1937. Twelve days later their flagship, Forde, returned from war service having been used as an Admiralty salvage vessel. In May the Forde replaced Cromarty Firth but she made her last crossing on 18 October 1949 and was replaced by the Halladale. She was a 1,370-ton River class frigate built at Glasgow in 1944. With the capacity to accommodate 50 to 60 cars and 350 passengers, she came into service on 6 April 1950.

At the Eastern Dockyard, not only did the car drivers make their way through the rapidly expanding industrial complex, but on reaching the ship the cars were being craned on and off. Whereas in Boulogne changes were taking place that would enable cars to be driven on and off ferries.

Dover Harbour Board (DHB) had vehemently opposed the industrialisation of the Eastern Dockyard but was over-ruled. Albeit, in November 1949, against strenuous opposition from Dover Corporation, DHB promoted a Parliamentary Bill to create a specialised Car Ferry terminal at the Dockyard. Permission was given in February 1951 and it was estimated that the facility would cost £500,000. 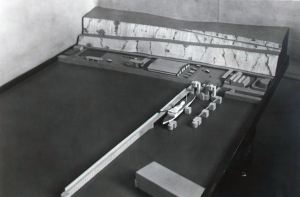 The contract for the new Car Ferry Terminal was given to Messrs Mears Bros. and work began in October 1951. It was hoped to have it operational the following year but was subject to delay due to a national shortage of steel.

27 June 1951 had seen Townsend’s Halladale, the first drive-on drive off cross Channel steamer crossed the Channel from the Eastern Dockyard. On board the guests included Board members from both Dover Harbour Board and from East Kent Road Car Company and also on board was an 8-ton single-decker with driver. At Calais the ramp was lowered on to the rear of the ship and the bus was driven off down the 120-foot incline without trouble. The driver turned the bus round and successfully drove it back on board. Four days later, the Calais ramp came into operation and the first drive-on, drive-off facility became available for Channel crossings.

In Dover, the mock-up of the proposed terminal was put on public view early in 1952, which showed that there would be two berths designed to accommodate up to four ships. Loading centred on the roll-on roll-off or ro-ro system that enabled cars to be driven straight onto and off the ferries. There would also be two standing jetties, access roads, custom shed, reception hall and offices. 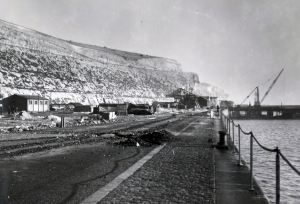 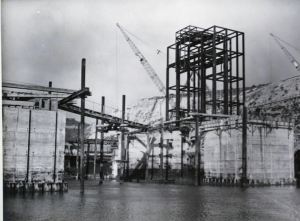 Due to the different loading levels of the ships – some had two car decks – the berths were equipped with hinged loading bridges. It was estimated that at low water spring tide there would be 21 feet (6.4 metres) of water underneath and therefore were designed to be moved 35-feet (10.7 metres) by means of winches housed in the portals.

The shore side construction included a 12-pump filling station and a 300-car reception park, with separate bays for each destination – Calais, Boulogne and Ostend. Traffic was marshalled into waiting lanes for particular ship/ destinations, which was a novel feature.

Besides seating, the reception building included a bank, post office, buffet, shops, telephones, restaurant, the Merry Dolphin, and bureaux for British Railways – Southern Region, Townsend and Belgium Marine ferry operators, as well as the motoring organisations. The 42,000 square-feet Customs examination shed was a separate building and allowed for 240 vehicles an hour.

Opening of the renamed Eastern Docks 30.06.1953 by the Minister of Transport the Rt. Hon. Alan T Lennox-Boyd MP. Accompanied by the Chairman of DHB – H T Hawksfield and the General Manager – Cecil Byford. DHB – Lambert Weston

On the 30 June 1953, the Minister of Transport, the Rt. Hon. Alan T Lennox-Boyd MP, formerly opened the terminal. He already knew the Eastern Dockyard as he had commanded a motor torpedo boat out of Dover during the war. The opening ceremony included changing the name to the Eastern Docks. It finished with a Rolls Royce bearing the Minister, the Chairman of DHB – H T Hawksfield and the Register/General Manager – Cecil Byford being driven aboard the Dinard. Built and engined by Denny’s of Dumbarton, she was a Southern Region steel twin-screw steamer, launched in 1924 for Southern Railway’s Southampton – St Malo service. She had been brought to Dover in June 1947 and had been fitted with a turntable on the main car deck that worked on the first-on, first-off principle. Having spent time at Folkestone, with the opening of the eastern Docks she returned to Dover for the Boulogne service. 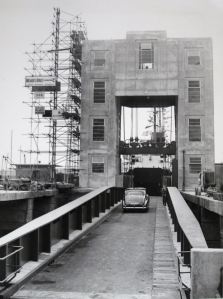 During the construction, the pre-war Aerial Ropeway and coal staithe were removed. At the end of 1953 the communications station opened at the end of the Eastern Arm. Providing 24-hour radio communication with vessels leaving and entering the harbour it was one of the first such facilities in the world. At the same time, eight British Railways cross-Channel ferries were fitted with radio-telephonic equipment. 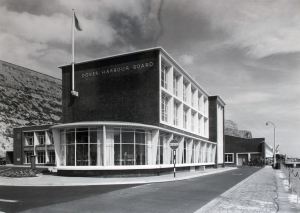 In 1953, the newly opened Eastern Docks coped with approximately 110,000 cars, buses and motorcycles. During the planning, it was not envisaged that there would be the massive surge in traffic that occurred over the following years. Demand quickly exceeded supply such that from 1 January to 30 November 1954 no fewer than 146,456 vehicles passed through the port!

To create more space, the industries that were seen as a key to Dover’s prosperity by the council, were encouraged to move out. Parker Pens, the council’s pivotal firm with approximately 40+ employees, moved to Newhaven and the Dover factory closed in 1958. The demand continued to increase and with the departure of the cable vessel H.M.T.S. Ariel and the demolition of the Submarine Cable headquarters, the Camber was filled in to provide more parking spaces. The number of ferry berths increased and the two original portals were demolished. Dover had become the ‘Busiest passenger port in the World!’

At the time of writing (2013), a £4.5m contract is underway for the redevelopment of the passenger terminal that will enable some vehicles to be processed quicker. It is also expected that a number of buildings will be demolished to create 11 more lorry lanes.

The construction photographs kindly provided by Dover Harbour Board

I am a local historian, whose love of Dover has lead to decades of research into some of the lesser known tales that this famous and beautiful town has to tell.
View all posts by Lorraine →
This entry was posted in Eastern Docks - Part II 1945-1953, Maritime. Bookmark the permalink.
Loading Comments...
%d bloggers like this: