Harbour of Refuge – A truly national work that would enable the rendezvous in times of war of the entire national fleet and serving as a national harbour of refuge, so much needed in the interests of humanity … Dover, holds the key of the Channel! (Steriker Finnis 1872)

Harbour prior to start of Commercial Harbour – Courtesy of Ian Cook

The battle for a harbour of refuge on the Channel coast of south-east England had been unremitting  for well over a century and Dover had been chosen as the ideal location. The first arm of the proposed harbour – Admiralty Pier – had been built but the remainder of the proposal was still on the drawing board and showed no signs of ever becoming a reality regardless of the number of lives lost at sea.

On Monday 9 May 1878, the first stone for a national harbour of refuge was laid at Boulogne. Over the previous few years, some 50million francs had been set aside by the French government for national harbours at Dunkerque, Calais, Dieppe, Havre as well as Boulogne. This was heavily commented upon in the national press, with the Times of 7 September 1878 stating, ‘The English experience has been disastrous, it is now nearly thirty years since the we set about forming a harbour of refuge at Dover and we lost no time in constructing fortifications to defend it, but the harbour itself has been reduced to the Admiralty Pier, where the sea in one night destroys the work of a year … The Strait of Dover is about the worse sea crossing in the world…’

In April 1880, the Liberals returned to power so the Earl of Granville (1815-1891) – Lord Warden and Chairman of DHB,  Steriker Finnis (1817-1889) – local councillor deputy Chairman of the Dover Harbour Board (DHB) and Charles Freshfield – one of Dover’s two Conservative Dover MPs (1865-1868 & 1874-1885), combined to exerted as much pressure on the government as they could muster. October 1881 saw some of the worst gales to hit the south coast for a number of years. In one week, there were 130 British and foreign ships wrecked of which, 104 were British. During that week, a large number of vessels tried to seek refuge in Dover harbour and over the days that followed an increasing number of disabled ships arrived in the bay.

Typically, the derelict Juliesche was towed in by the London tug Palmerston, accompanied by Deal lifeboat and the Deal lugger Briton’s Pride. The Juliesche was a schooner and was picked up four miles south-west of the South Sandhead lightship with only the timber she was carrying keeping her afloat. It is evident that the crew made every effort to save the vessel but they had all been swept into the raging sea. 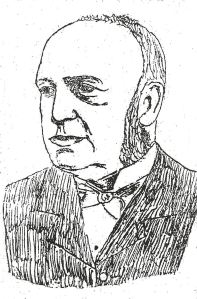 Finnis and the Harbour Board Register, James Stilwell (1829-1898), put together yet another Bill that was then presented to Parliament in July 1882. This was asking for the powers necessary to create a large harbour that would enclosed Dover bay as far as the Northfall Tunnel – Eastern Cliffs – and serve as a commercial harbour as well as a harbour of refuge. The Standing Orders of both Houses were suspended so that the proposal could be fully discussed. The major obstacle, however, was the Continental agreement between South Eastern Railway (SER) and the London Chatham Dover Railway (LCDR) whereby they pooled the receipts received from Channel crossings by their ships and then divided them. The contents of the Bill, it was argued by SER, could interfere with this arrangement.

On reconsideration, the Harbour Board agreed reduce the dues that LCDR were paying to using the harbour and Dover’s other Conservative MP (1874-1889) Major Alexander Dickson (1834-1889), supported the Bill. He pointed out that the eminent engineer, the late James Walker (1781-1862), along with Sir John Hawkshaw (1811-1891), both believed that the works projected by the Bill could be carried out. The Bill was given Royal Assent but two years later, a Treasury minute intimated that the government wanted to carry out works themselves to their own designs.

The government, in 1883, announced that convict labour would be used for the building of a National Harbour. Two designs were put forward for the harbour and the land behind the Castle was earmarked for what became Langdon prison. Under the superintendence of oceanographer and hydrographic surveyor Captain Thomas Henry Tizard (1839-1924) on the Triton, a major survey of Dover Bay in April 1885 was carried out. The area covered extended from Shakespeare Cliff on the west to Langdon Bay on the east, the distance off shore was a little over 1¼ miles. The work then stopped.

The Dover builder, William Adcock (1840-1907), who was involved in the building of Admiralty Pier, had been elected Mayor and in 1886, the Town council voted to take matters into their own hands. They introduced a Bill in parliament to restore the ancient union between the Town and Port and asked for Harbour affairs to be entrusted in a managing Committee of the Town Council with representatives of other interests co-opted. As the Bill progressed through parliament, concessions were introduced such that the Bill was in danger of danger of bearing little resemblance to what the council wanted, so they withdrew it.

Two years later, on 4 April 1888, Major Dickson announced in the Commons that the convict prison was ready and occupied, and, he asked, ‘was it the intention of Government to proceed with the harbour of refuge at Dover?’ William H Smith (1825-1891) – later Lord Warden (May 1891 until his death that year) – on behalf of the government said that it was. That year the Wellington Dock gates were widened ten feet to accommodate the new Channel paddle steamers the Victoria, (LCDR 1,030 gross launched 20 May 1886) and the Empress (LCDR 1,213gross launched 4 June 1887), as well as others of that class when they came on station. By that time, the Harbour Board had been in existence 28-years and the harbour of refuge was still an unfulfilled promise.

Out of pure frustration with the government, on 3 October 1890, the Harbour Board voted to undertake the much-needed harbour of refuge themselves. They unanimously agreed to apply in the next session of parliament for a Bill to authorise the Board to spend £300,000 and to raise more money by the introduction of a passenger tax. This was similar to one imposed by the French government to help pay for their harbours in northern France. The Register, James Stilwell, drafted the application and included a design for the new harbour submitted by Sir John Coode (1816-1892), of Coode, Son and Matthews.

The proposed harbour of refuge was to be bound on the western side by the existing Admiralty Pier that was to be extended by 560-feet. On the eastern side an arm 2,760-feet seaward, starting in a southerly direction and curving towards the south-west was to be built. This gave an entrance 450-feet wide facing towards the east and sheltered by an overlap of the extended Admiralty Pier. Within the new harbour would be a water station – a covered space to accommodate four or five cross Channel steamers – and a connection from the shore over which the trains would pass to get alongside the cross-Channel ships. However, the best contract price for the proposed eastern arm was over £400,000, so in the final submission, presented in August 1892 the estimate for the work was increased to £600,000.

The submitted proposal stated that the number of passengers travelling to and from Ostend were just under 17,000 in 1836 when Parliament first recommended a harbour of refuge at Dover. The proposal then went on to compare the years 1861 to 1891:

In 1861 the passenger traffic through Dover harbour was:

In 1891 the passenger traffic through Dover harbour was:

In 1861, the Bill stated, the largest vessel in the cross-Channel service was the Prince Frederick William (215-tons) and smallest the Ondine (101-tons). In 1891 the largest was the Calais-Douvres (1212- tons) and the smallest is the France (388-tons). The 1891 Bill was Royal Assent and the government granted the power for the Harbour Board to levy a tax of 1 shilling (5pence) on each Channel passenger. Parliament also agreed to lease the Admiralty Pier to the Harbour Board for 99-years.

The plans were submitted to the Admiralty, the War Office, the Board of Trade, and the Office of Woods and Forests, and the approval was given by all except the Admiralty. The contract for the new east Pier was given to John Jackson of 2, Victoria Street, Westminster. The sub-contractor for the ironwork went to Messrs Head, Wrightson & Co. of Stockton-On-Tees. As for the extension of Admiralty Pier, sanction by the Board of Admiralty was awaited so a contractor was not appointed. 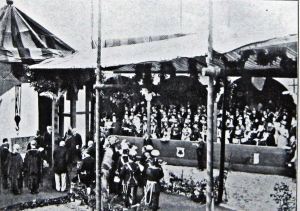 On 26 July 1893 the first stone of the eastern arm of the project, called Commercial harbour, was laid by Edward, Prince of Wales – later Edward VII(1901-1910), and took the name of Prince of Wales Pier. On the same day, W. Agnew presented ‘Harbour of Refuge’ by Frederick Walker (1840-1875), to the National Gallery. In September 1894, the first submarine block of the Prince of Wales Pier was laid on the bed of the sea but approval from the Admiralty for alterations to the Admiralty Pier were still awaited.

The Admiralty, at this time was taking a close interest in events on mainland Europe. On 18 January 1871, Germany had unified under the country’s first Chancellor, Otto von Bismarck (1815-1898), which changed the balance of power in Europe. Bismarck strived to keep the peace but in 1890, Wilhelm II (1888-1918) effectively sacked him and then pursued a massive programme of naval expansion. It was this that had galvanised the British government into sanctioning the Commercial Harbour.

As the situation in Germany continued and concern increased the Board of Admiralty presented a revised proposal to government. In May 1895, when about three-quarters of the Prince of Wales Pier had been built the Admiralty announced their decision. The Admiralty was going to use the port of Dover as a base for the Royal Navy and that this new Admiralty Harbour, would enclose the bay – as we see today!

I am a local historian, whose love of Dover has lead to decades of research into some of the lesser known tales that this famous and beautiful town has to tell.
View all posts by Lorraine →
This entry was posted in Harbour of Refuge Part II, Maritime. Bookmark the permalink.
Loading Comments...
%d bloggers like this: