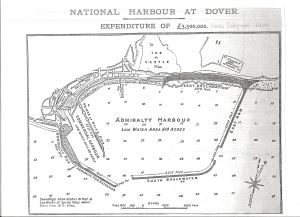 At the outbreak of World War I (1914-1918) on 4 August 1914, Dover’s harbour was taken over by the Admiralty and one of the main considerations was to prevent enemy submarines entering. It was decided to block the Eastern entrance with a moveable V-shaped boom but it fitted so badly that it was carried away during a heavy sea … as was its replacements! With regards to the Western entrance, not only was there a considered danger from submarines entering but an even greater danger from torpedoes being fired from outside that entrance on moored ships within the harbour. The quickest, cheapest and most effective way to block the entrance was to sink two old ships filled with shingle across and the Livonian and the Montrose were chosen.

The Montrose had been built at Middlesborough in 1897 and formerly belonged to the Canadian Pacific Company of Montreal. The ship had achieved fame in 1910 when her Master, Captain Kendall, had recognised Dr Hawley Harvey Crippen (1862-1910), who was wanted for the murder of his wife. He was with his mistress, Ethel le Neve, amongst the passengers on the way to Montreal from Antwerp. A telegram was sent from the ship to England and a detective took a faster passage from Liverpool. He arrested the pair off Father Point in the St Lawrence, Canada. Crippen’s arrest had followed the first use of wireless telegraphy to apprehend a criminal and it was for this reason that the case received notoriety.

To prepare the blockships, both were stripped of their interiors and the masts, funnels plus two upper decks were removed. On the remaining superstructure, four steel towers were built to hold the nets that were to be swung across the Western entrance. Unfortunately, during the night of 28 December 1914 a gale blew up and the Montrose broke her moorings on Admiralty Pier. She then slid along the Southern Breakwater and four crewmen from a tug managed to get on board. They tried to secure a line on the former Atlantic liner but the tug was not powerful enough and the Montrose broke free. She then sailed majestically out of the Eastern entrance with four hapless crewmen on board.

The Montrose rounded the South Foreland and came to rest on the Goodwin Sands. That night the Deal lifeboat, Charles Dibden, had been called out after the South Goodwin Lightship had broken her moorings. The crew of the Charles Dibden were unable to reach the Lightship before she was swept out to sea and lost. Due to the minefields in the area, the coxswain, Bill Adams, decided to anchor for the night when he saw the Montrose looming out of the darkness. Bill realised that she was out of control and when she came to rest the four crewmen sent up distress flares. The lifeboat went to the rescue and saved the men. Sadly, the four crewmen lost their lives a few weeks later in another shipping disaster. As for the Montrose she broke in half during another gale but the wreck was still visible on the Goodwins until the early 1930s 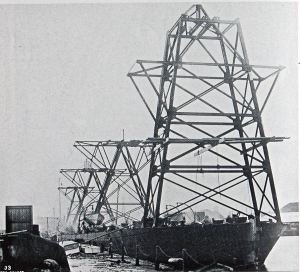 Spanish Prince being converted into a blockship and sunk March 1915. Alan Sencicle Collection

Following the cessation of hostilities in 1918, the blockships were pulled to one side and the Western entrance was reopened. The Admiralty gave consideration to the removal of the blockships but they had declined to make the decision when the harbour was formerly handed over to the Dover Harbour Board (DHB) on 29 September 1923. DHB recognised that the blockships were a shipping hazard but were in financial debt as they had earned very little income while the harbour was in the hands of the Admiralty. 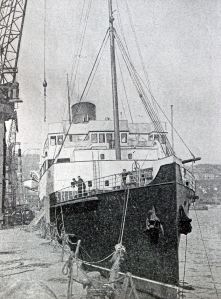 Maid of Kent – twin-screw turbine steamer of 2,693 tons gross, built for the Southern Railway in 1925

In November 1925 DHB sort, through an Act of Parliament, to permanently close the Western entrance. They argued that it was subject to strong currents across the entrance. In the same Bill, they applied for the removal of the blockships as it was a hazard. Their argument was strengthened on 18 March 1926 when the newly built cross-Channel ferry, Maid of Kent, launched on 5 August 1925, on leaving the harbour was swept by the currents onto the Southern breakwater smashing in her bow below the waterline. The following 13 February the same ship hit the blockship Livonian. The Admiralty opposed the Harbour Board Bill saying that it was essential for the Navy to have two entrances in the harbour. As Dover was, at this time, a commercial port, their argument did not hold and the Bill became as Act. However, experiments using models showed that closing the Western entrance would create more problems than already existed and so that idea was dismissed. 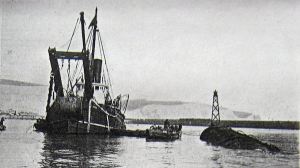 In 1930, DHB invited tenders to remove the blockships and responses came from Dutch, German and English firms. However, the prices quoted were so high that DHB felt the job could be done cheaper in-house particularly as the Harbour Master, John Iron, was a salvage expert. Iron’s plan was to remove the gantries and then pump out the ballast, raise the ships and take them to the Eastern Dockyard for scrapping. £12,000 was spent on equipment and work started at the end of February 1931. The Livonian was lying nearest to Admiralty Pier so she was dealt with first. The gantries were removed and the ballast was pumped out using DHB’s salvage vessel, Dapper, and dumped in the Channel. Divers using acetylene burners then cut the ship into four pieces. Two Admiralty lighters were brought in, filled with water and sunk to the level of their decks. At the same time, divers passed six 9-inch steel wire ropes under a section of the ship and at low tide these were fastened into position. As the tide started to rise, on 29 August 1932, the DHB tug, Lady Duncannon pumped the water out of the lighters and the first section of the Livonian was lifted. The Lady Duncannon along with her sister tug, the Lady Brassey, pushed the section across the harbour to the Eastern Dockyard for disposal.

After the removal of the final section, the bits that remained on the seabed, were blasted away on the morning of 6 May 1933. The Western entrance opened that afternoon for the first time in two years. On average 40 men and six divers had been engaged on a daily basis but the operation had been fraught with danger although no one was killed. It was therefore decided to leave the Spanish Prince where she lay. However, she proved to be a shipping hazard and after being struck by the Zografia Nicolaou on 14 March 1935 the gantries were removed. Later, during a gale, the Spanish Prince shifted position and became less of a hazard.

During the Battle of Britain, in 1940, it was again deemed that the Western entrance should be blocked. The War Sepoy, a Z-Type tanker, built by William Grey and Co. of West Hartlepool under the World War I Standardised Shipbuilding Scheme, was chosen. She was 412-foot long, 52-foot beam and 5,800 tons gross and completed on 6 February 1919. Too late for active service, she had spent the inter-war years as a fleet oiler. She was in Dover harbour during an air raid on 19 July 1940 when she was badly damaged. Beyond repair, the War Sepoy was filled with concrete, towed into position and sunk in the Western entrance. The steamer, Minnie de Larringa joined her, on 5 February 1941. She had been sunk in the Port of London by German bombing before being refloated and towed round to Dover to be sunk again.

In October 1945, the blockships, having served their purpose, were recommended for removal. Two years later the first tentative steps were taken but due to the adverse currents of water, poor weather and other demands on Admiralty salvage boats, not a lot was done. On 2 May 1950 naval divers operating from the Admiralty salvage craft Salvictor, began a preliminary survey of the War Sepoy and the Minnie de Larringa and noted that the War Sepoy lay buried under the hull of the Spanish Prince. 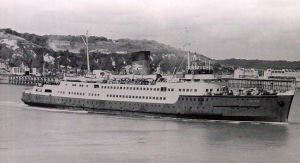 The salvage tugs Succour and Swin in August 1960, with the help of DHB tugs Diligent and Dominant, raised a 100-foot by 50-foot section of the Minnie de Larringa. This consisted of the second and third holds and weighed about 300-tons. A second large piece of the blockship was lifted a month later and the final portion of the War Sepoy was lifted in August 1962. The pieces were taken across the harbour to the Eastern Docks to the Dover Industries wharf for disposal by one tug pulling and the other pushing. On 26 April 1963, the Western Entrance was opened for the first time since 1940 and the Golden Arrow vessel Invicta left Dover that way. At the helm was the senior master of the Southern Railway’s Fleet, Capt. William Waters, who gave a blast on his siren to celebrate the event. 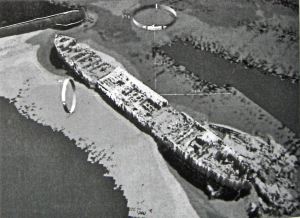 Spanish Prince – Sonar scan, prior to clearing to a depth of 8.5 metres during 2010. Thanks to Dover Harbour Board

However, the Spanish Prince collapsed during the operations and shifted position. A Cardinal buoy, to the east of the Western entrance marked her new position. The blockship’s superstructure continued to break-up naturally but remained potential hazard. In 2007, plans were floated to redevelop the Western Docks and included a ferry terminal with four roll-on, roll-off ferry berths. For the plan to work the Spanish Prince had to be removed. Salvage work, undertaken by Herbosch Kiere and costing £2.4million, started early in 2010. They used their multi-purpose barge Waasland, together with specialist lifting and cutting equipment. The Spanish Prince was cut up where she lay and taken ashore by tug and barge. On completion, the chartered depth where the she had laid was increased to 8.5metres and the Cardinal buoy was removed. The proposed development, at the time of writing, has not gone ahead.

I am a local historian, whose love of Dover has lead to decades of research into some of the lesser known tales that this famous and beautiful town has to tell.
View all posts by Lorraine →
This entry was posted in Blockships, Blockships, Port and Transport, World War I. Bookmark the permalink.
Loading Comments...
%d bloggers like this: